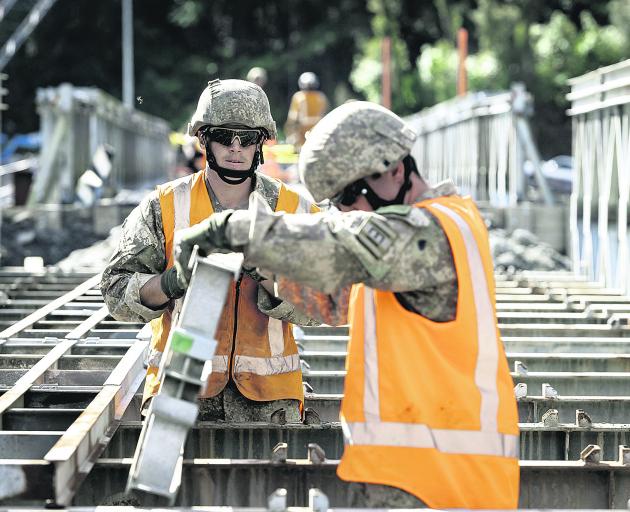 The New Zealand Defence Force has sent New Zealand Army engineers to work with the NZ Transport Agency and engineering and construction company Downer to rebuild the Waiho (Waiau) Bridge, which was wiped out by the recent floods. PHOTO: CORPORAL SEAN SPIVEY /NZ DEFENCE FORCE
If the Government paid to shift people off the flooded south bank at Franz Josef landowners living beside the sea and in flood plains all over the country would be seeking the same, West Coast-Tasman MP Damien O'Connor says.

West Coast leaders have been fighting publicly over whether to sacrifice the flood-ravaged south side of the Waiho (Waiau) River, to save Franz Josef township on the opposite bank.

Westland Mayor Bruce Smith says the West Coast Regional Council has done nothing, and Mr O'Connor says Mr Smith is playing politics and it is time to stop grandstanding.

One of the unanswered questions is who would pay if the south bank was abandoned.

Other issues are the fact Franz Josef sits atop the Alpine Fault - a previous proposal suggested moving the entire township at a cost of $300million - and whether the state highway and bridge need to be shifted to safer areas.

For now, no-one can even agree on the response to the south side flooding.

Mr O'Connor said if the Government was to fully fund compensation to abandon that area it would have implications for the rest of New Zealand and those in coastal properties and flood plains. The cost could be "astronomical".

The issue of moving the highway was "first and foremost" for the district and regional councils.

Mr O'Connor said he was committed to fighting for the fairest and most sensible solution.

Asked if the Franz Josef township should be moved off the Alpine Fault, he said longer-term protection of the village would be improved by relieving pressure on the south side and letting the river fan out that way.

"There are technical issues that need to be worked through. There is a huge task facing us all."

Transport Minister Phil Twyford's office was asked about plans previously drawn up to relocate State Highway 6 on a new deviation through the bush to reconnect with the foot of the Fox Hills at Dochertys Creek, but the question was referred to the NZ Transport Agency.

Mr Smith yesterday defended his role, saying he was out to "protect our people".

"We can't just say `you're gone' and there's $35million of investment you walk away from."

Mr Smith said the main stopbank on the south side had been "80% washed away".

It was insured by the regional council and therefore it should claim and rebuild, Mr Smith said.

The 83 landowners on the south bank were united in calling for that, he said. - Greymouth Star