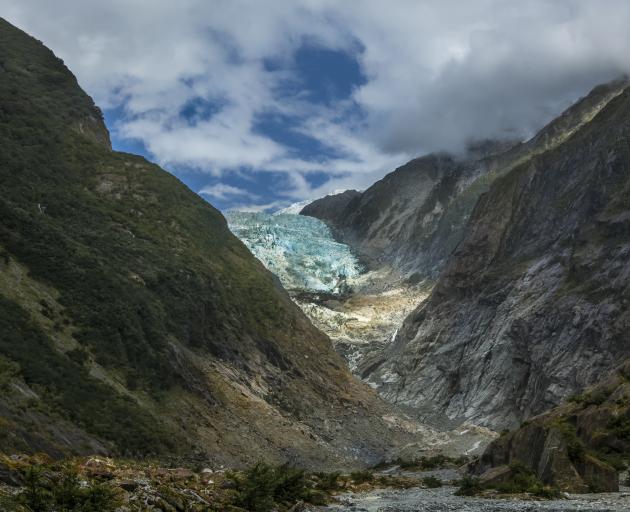 The Franz Josef Glacier has now advanced 50m, with 30m of that since March 2017. Photo: Getty Images

Victoria University glaciologist Dr Brian Anderson said the most recent retreat started in 2008, and it lost 1.43km in length.

It stopped retreating in December last year, and the advance then started to pick up pace.

"While it has so far only made up a tiny amount of the ground lost in the last eight years, the most encouraging sign is that the glacier is continuing to thicken up, which indicates the advance should continue for a little while at least.

"Why is the glacier advancing? Isn't it supposed to be getting warmer? While glaciers typically average the weather over decades and tell us about long-term climate changes, Franz Josef can advance after just a few years of mass gains."

Dr Anderson said the glacier was telling us about the weather over the past few years, rather than a 30-year climate average.

"On average it is getting warmer, but these super-sensitive glaciers will keep having these minor advances due to just a few years of positive balances, while less responsive glaciers like Brewster keep on retreating."

But Dr Anderson tempered his message, due to the good weather this year.

The glacier was advancing into a furnace, he said.

"We know that sea surface temperatures in the Tasman Sea are a key control of glacier advance and retreat, and at the moment they are 3degC or more above
average.

"This heat tends to stick around, which is one of the reasons that we are expecting a warm summer.

"Good for visiting glaciers, but not so good for the glaciers themselves."