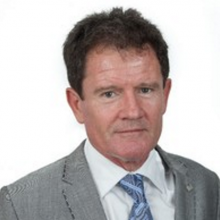 The man behind the proposed $500 million underground gold-mine development at Waiuta said he expected it would be producing within about five years.

In mid-July it was announced Tasman Mining had signed an agreement with Oceana Gold to develop the former Blackwater mine, which closed in 1951 following a shaft collapse.

They plan to drive a tunnel deep underground to meet the gold seam that was mined via a shaft from Waiuta between 1908 and 1951. The original mine level got as far as 1000m underground.

When the shaft collapsed, Waiuta township, about 20km south of Reefton, was abandoned and the remaining gold was left in the ground.

Tasman Mining managing director Mark Le Messurier said it would take 12 to 18 months to raise the finance and to establish the site. It would then take a further two years to develop the 3.3km decline (main tunnel) while drilling to prove the gold was there.

Mr Le Messurier was on the West Coast on Monday to meet the mayors and Development West Coast. He has to raise finance but said it would not be from DWC.

So far, 10 intercepts had been drilled, the deepest going 650m below the old workings.

"The ore body is still open."

The plan was to process the ore nearby, unlike Oceana Gold which railed the gold-bearing ore to its Otago mine to be refined.

Asked why Oceana Gold did not develop the Blackwater mine alone, he said it was smaller than typical Oceana projects.

Oceana was putting money into Waihi and Macraes, as well as overseas mines in South Carolina and the Philippines.

However, Mr Le Messurier said he believed Blackwater was a "tremendous opportunity".

His company, Evolution, had taken Australian gold mines to production, and one had gone on to become a large gold producer. It has at times sold off weaker mines to finance better ones.

Recruitment has begun for a project manager, but the majority of the 30 or so workers will be contractors, using local resources where possible.