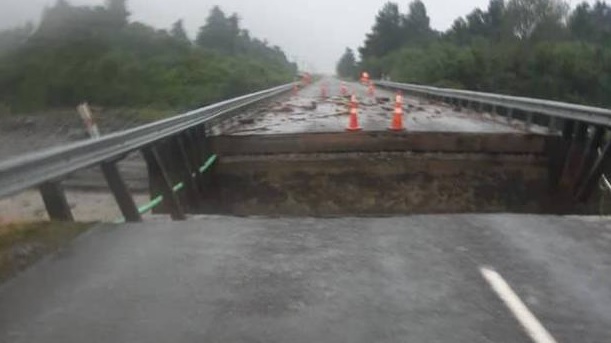 Damage to the Little Man Bridge on State Highway 6. Photo: NZTA
Almost 1000 tourists remain trapped on the West Coast after after washouts and slips blocked the highway in both directions.

The earliest most of the 970 tourists trapped in Franz Josef are likely to get out is Friday, while in the Timaru District, the council says it could take weeks to recover from damage caused by floods.

Townships on the West Coast, including Franz Josef and Fox Glacier, are cut off after washouts and slips blocked State Highway 6.

On the other side of the South Island, the flood-damaged Rangitata Bridge, on SH1, and the bridge at Arundel, on SH72, are closed.

Timaru District Council duty controller Justin Bagust said road crews had been working through the night and the bridges would be inspected this morning to check when they may be able to reopen soon.

"It's the second largest time that we've ever had this much water come down the Rangitata in 40 years," he said.

"So there is as much water in the river as there is out of the river - so quite extensive break-outs and flooding alongside of that south branch."

An update from Council is expected about 8am.

The good news is that much better conditions are expected today, with Isolated showers clearing in Westland this morning and elsewhere during the afternoon.

On the east coast, Timaru District remains under a state of emergency. It will not be lifted until at least one of the bridges reopens, authorities said.

The washouts and slips south and north of Franz Josef mean the only way anyone can get in or out is by helicopter.

Up to 45 dairy farms just north of Franz Josef - at Whataroa - are also cut off and will start dumping milk today because no tankers have been able to get through since late last week.

Civil defence co-ordinator in the area, Wayne Costello, said the best hope of reconnecting Whataroa and Franz Josef with the rest of the country is to repair the road to the south - something road crews are hoping to get done by the end of the working week.

He said it was now a case of flying in enough food for those who are trapped in the town this week.

A portion of a slip-hit West Coast highway could be reopened after authorities assess it this morning.

SH6 from Hokitika to Franz Josef has been closed since Saturday after a large slip at Mt Hercules south of Harihari.

Further south, the highway from Harihari and Mt Hercules is likely to be closed until at least Friday.

Meanwhile, a generator is due to arrive in Fox Glacier by midday today where power has been out since Saturday.

A convoy of about 400 tourists was led out of the town yesterday.

Civil Defence Minister Peeni Henare and the Director of Civil Defence Sarah Black-Stuart will be on the West Coast today assessing the impact of the slips.

He said the Ministry of Foreign Affairs is supporting foreign tourists stranded by the slips.