Much of Westland isolated

Raging floodwaters have severed access on the West Coast, swallowing a major bridge and causing slips throughout the region.

A state of emergency was declared in Westland at 5.45pm yesterday, shortly after the Waiho River Bailey bridge on State Highway 6 at Franz Josef was wiped out.

The highway between Hokitika and Makarora was closed earlier in the day because of slips, including two at the Omoeroa Bluffs, in the Fox Hills, and surface flooding.

A slip at Candys Creek on State Highway 73 had closed the highway through Arthur's Pass overnight.

Jason Schonberger, a Kiwi Experience bus driver from Dunedin, said he heard the ''biggest crack'' as the Waiho bridge fell away. 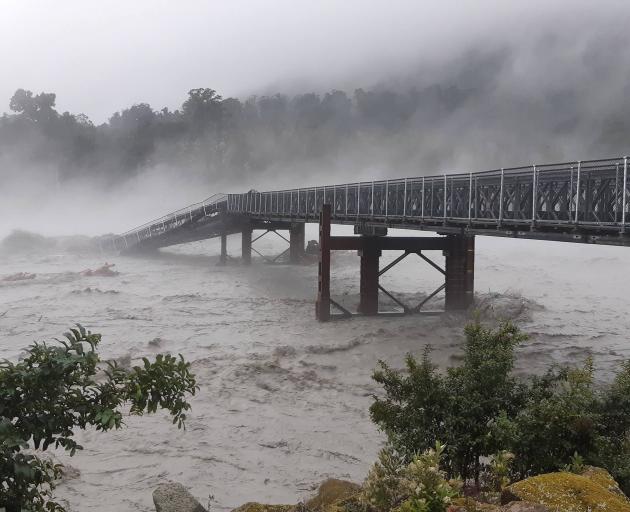 Much of the West Coast is cut off after a section of the Waiho River bridge was swept away. Photo: Civil Defence/West Coast Emergency Management
''We could see the embankment was washing away. About 45 minutes later, a little span fell down, followed by a big span, then a third.''

Westland Mayor Bruce Smith had been standing on the bridge about 2pm and said rocks ''the size of a small car'' had been hitting the piers.

''The bridge was shuddering.''

The New Zealand Transport Agency network manager Colin Hey said the Waiho bridge closure would continue until it could be safely replaced.

Police advised all roads had been checked and all tourists were in secure accommodation for the night.

Thirty-two people were in a welfare centre in the Haast town hall.

At 5pm, Civil Defence staff said the Haast River was close to its record high of 7.6m, but had levelled off. It had spilled over its banks in places. 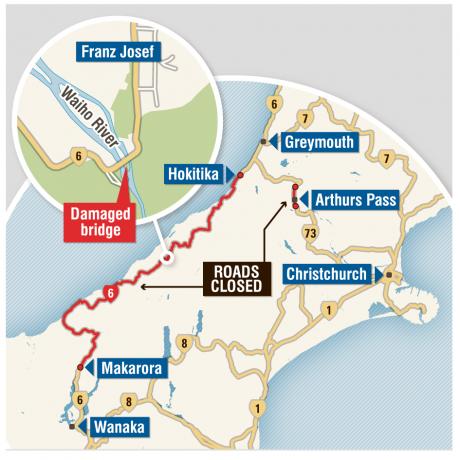 The Waiho River was running at 7.6m and had dropped from its peak, while the Hokitika River was at 5m and rising.

Before noon homes in Waiatoto were evacuated after the Waiatoto River breached its banks.

In less than 48 hours the Haast River, at the Roaring Billy catchment, had received 548mm of rain, which was nearly 10% of its normal yearly rainfall.

A water level recording of 7.423m was the second-highest on record at the station since 1969.

Haast man Kerry Eggeling said yesterday the flood was the largest in about 30 years.

The former councillor and civil defence adviser said two or three houses at Waiatoto had water through them.

The bar blew out on the Hapuka River, letting floodwaters drain.

''That kept the water down around our house. If it had not blown out, we would be in deep trouble.''

In Queenstown, Kinloch Rd was closed, as was part of the Glenorchy-Paradise Rd, and the Wanaka-Mt Aspiring Rd past Treble Cone was also closed.

Lake Wakatipu was expected to rise to between 310.6m and 311.4m, which at worst would cause minor ponding of low-lying areas around Queenstown.

The Matukituki River was flowing at close to 1200cumecs yesterday afternoon, washing sediment and tree branches into Lake Wanaka with extreme force.