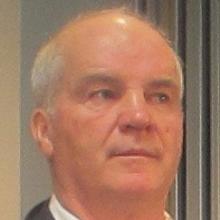 Kevin Stratful
Development West Coast economic development consultant Kevin Stratful - a key figure in the controversial waste to energy plant proposed for Hokitika - resigned at the weekend, and then changed his mind.

"I had elected to resign,'' he said in an email yesterday morning.

"However, all weekend I have been inundated with phone calls from West Coast leaders and business people asking me to reconsider.

"I am overwhelmed by this level of support. As a result I have withdrawn my resignation and will continue to lead the strategy outlined in the West Coast economic development strategy, which was released in 2018.''

Mr Stratful, a Briton, came to the West Coast in late 2015 when he was employed by the West Coast Regional Council in the new role of economic development manager.

He moved to a consultant's role with DWC this year.

A West Coast group employed a private eye to investigate Mr Stratful and his background, and has quietly released a dossier to selected parties around the region.

DWC chief executive Chris Mackenzie said he was aware of the dossier but did not know the detail.

"Kevin Stratful has been a breath of fresh air for businesses on the West Coast and as such we cannot afford to be distracted by what are perceived conflicts when at issue is the email address from which an email has come,'' Mr Mackenzie said in a statement.

"I did not accept Kevin's resignation last week on the basis that he is needed to continue the work he is doing for both Development West Coast and in his own right.

"He will not please everyone all the time but the results of his work in the tourism sector clearly show his commitment to getting the best for the Coast.

"I am pleased that Kevin has decided to remain with DWC and continue that work.''

The Greymouth Star has seen the dossier, which examines his work history in New Zealand.

Mr Stratful did not refer to it in his statement yesterday morning.

The Mayors of Westland and Buller also issued statements over the weekend in support of Mr Stratful.

Buller Mayor Garry Howard said that unfortunately when you have a number of hats, emails could come from one address.

"I'm personally guilty of receiving private emails to Buller District Council address and replying rather than switching to my private email account.

"The bottom line is, I value Kevin's business knowledge, his integrity and if I was developing a business idea I would certainly want Kevin as part of a team to get an idea turned into operating business,'' Mr Howard said.

The New Zealand Institute for Mineral to Materials Research Trust, Reefton Distillery Co and a number of smaller companies were all in development phases that Mr Stratful was working directly with, he said.

Mr Howard also credited him with the development and strategy for Tourism West Coast which had increased the West Coast GDP by $65million since 2016.

Lately, Mr Stratful has come under growing pressure due to his ties with Renew Energy Ltd, which proposed a waste to energy plant in Westport with rubbish stockpiling in Reefton, before withdrawing the scheme due to a community backlash.

Renew Energy was then courted by Westland Mayor Bruce Smith and has now selected a new site near Hokitika.

Last week, Mr Mackenzie told the Westport News that Mr Stratful should not have used his work address to send emails about companies he is involved with.

Mr Mackenzie said he told Mr Stratful some months ago to stop sending emails regarding waste to energy from his DWC address.

However, confidential emails obtained by the Westport News showed he had continued to do so, despite being a director of Renew Energy.

He also sought help, on DWC email letterhead, for Reefton Distilling while he was a director of that company.

He resigned as a director when the Reefton community rose up against plans by Renew Energy to store South Island rubbish on the edge of the township, for burning in an incinerator in Westport.

Mr Stratful has always denied any conflict of interest between his public and private roles.