Train carriage up for Bach of the Year 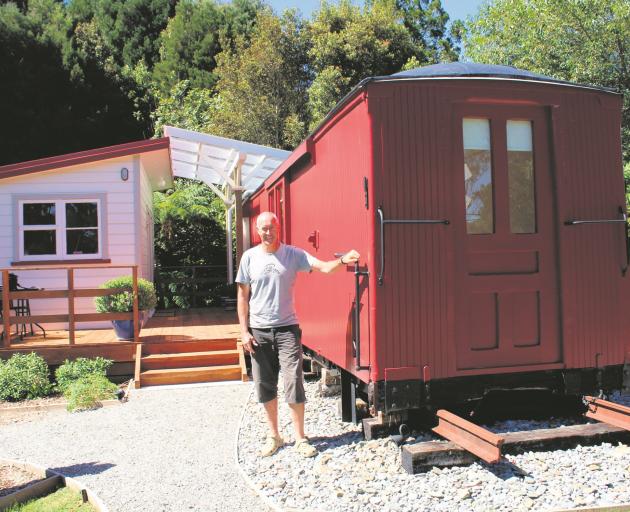 Dave Cross rescued the train carriage. Photo: Greymouth Star
A runaway train carriage turned bach at Rutherglen has been named as a finalist in the Bach of the Year Awards.

It is among 24 properties in the finals, including a log cabin in Twizel, a farm stay, a Tuscan-style beach house, an early settler cottage and a converted cow shed.

The railway carriage, rented out as accommodation, comes with a unique category.

Originally a NZ Railways guard's van it was involved in a runaway rail smash at Moana on March 13, 1963. For years the Lake Brunner Yacht Club used it as part of their club base at Moana.

However, in recent years when the yacht club built a more permanent facility the guards van fell out of use again and the Department of Conservation requested its removal.

Club member Dave Cross rescued it and shifted the wagon to his property, in January 2012 with the intention of restoring it as a sleepout.

"I went to see a man in Westport who gave me plans for a 34-foot guard van; I worked out what it should look like," Mr Cross told the Greymouth Star last year.

"It cost more than I expected. We decided then to so something with it rather than just leave it rotting at the end of the garden in the rain and weather."

The winners of the Bach of the Year will be announced at the end of October, as judged by home renovation specialists and former The Block NZ winners, Alice and Caleb Pearson, and the young winner of Bookabach's junior judge competition, Jayden Whitehead.

The public can also get involved in the judging process at http://bookabach.co.nz/awards to vote for their favourite bach amongst the list of finalists.

The finalists were selected based on a range of criteria such as quality of images accompanying their Bookabach listing, standard of guest reviews and holiday home description, as well as category-specific criteria.