The new Covid-19 impact survey of 103 Glacier Country businesses found 16 had closed, roughly 62 percent of jobs have been lost, most are operating at 20 percent of their normal capacity on average and at least a quarter of the population have left.

The findings have been sent to Tourism Minister Stuart Nash along with a nearly $35 million wishlist to help the communities stay afloat.

Businesses are adamant they don't want a government handout, but they may not be around without some help.

They've had to cut roughly 80 percent of their staffing and put one of their Glacier Country hotels into hibernation.

"It was a growing community, but now it's completely the opposite, and with no clear indication from the government on what support will be provided to the region, I see a downwards trend that will be hard to stop," Tschampel said. 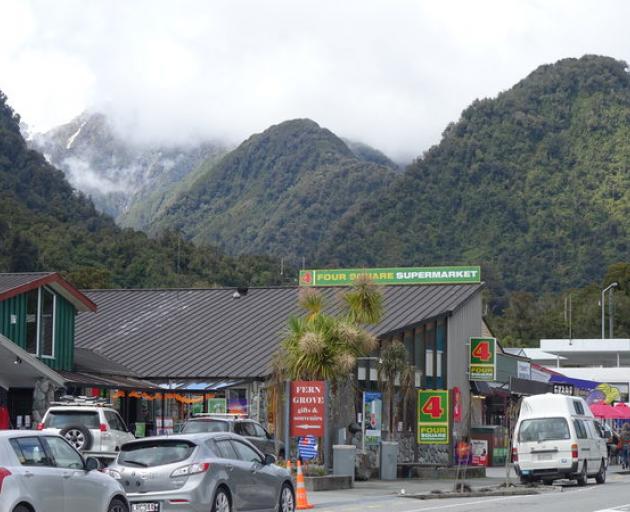 Franz Josef. Photo: RNZ
The government had to decide whether it wanted the Glacier Country towns to still exist when borders reopened, and then work with communities to find a solution, he said.

Their summer season came to an end a month or two early.

"Normally the summer season lasts probably until the end of March, April, and with not having a winter season because we don't have the snow - we have the rain - it doesn't look that things will get better before they get worse."

That's the same grim picture painted by a survey from Development West Coast which forecasts the GDP contribution will be down by more than $382 million over the next four years.

Its chief executive Heath Milne said businesses weren't the only ones to suffer.

"We're already seeing a lack of volunteers so Fire and Emergency, they can't man their engines to go to a callout now so they're going out under-manned which is obviously a major issue.

"Rolls of the schools are dropping. It's just got that ripple effect downstream," Milne said.

The letter to Nash outlines the action businesses have taken to date from adapting to different markets and developing new products to seeking assistance through the Covid Regional Business Partner Network.

Business owners had worked hard to stay open, but they'd reached the end of their tether, he said.

"But then to keep them in business for the next 12 months, we wanted to be very specific and that's where that package request [fits in].

"It's about $35 million and that would pretty much save the community we think until we can get tourism back on stream," Milne said.

The report forecasts that - without support - job losses could hit 84 percent, more than 65 percent of businesses will close, volunteer services will be so short-staffed they can't operate and close to a third of people will leave the community in the next six months.

Adam Haugh is the owner operator of the Bella Vista Franz Josef and Waiho Hot Tubs, and a partner in SnakeBite Brewery and Restaurant.

Businesses were trying to stay optimistic, but it was a challenge, he said.

"We've got something we want to fight for and that is looking after the core community.

"We're used to running our businesses and our district for four to five months of a year at 20 percent. Over the summer period when international visitors come through, we put money aside to keep us going through that winter."

Instead, he said many were pouring their savings into their businesses to keep them afloat after months of operating at normal winter levels - roughly 20 percent.

Without help, businesses would have to close, Haugh said.

"My businesses probably will have to. Forward budgets are tight especially when there's very little revenue.

"For the month of May, June and July, I've got three reservations at my motel. Thankfully New Zealanders usually book later. But without outside support as is presented in that report, we really are going to not be here for when our visitors from overseas want to come."

Franz Josef Wilderness Tours has gone from a usual team of eight to three over peak season and soon that will be down to one.

Its owner director Dale Burrows said they were fortunate to get involved with DOC's Jobs for Nature programme.

"For us, a wage subsidy would be fantastic. It would mean we'd be able to have our staff and ourselves available to do work for our company rather than having to do the DOC work to make ends meet," Burrows said.

A trans-Tasman bubble could save a lot of businesses in the community, but it should only happen when it was safe, he said.

Burrows has a simple message for New Zealanders - please visit.

"For now Glacier Country is still open and everybody is still here and there are operators that are waiting for people to come and join us on our activities and check out the amazing place that we have here.

"If we can keep people coming and keep the interest going, that would be fantastic. Everyone's doing their best around here to try and hold up a brave front. But it's impossible to say what's going to happen in two months' time, let alone six, nine months' time."

Glacier Country businesses have invited the minister to visit with hopes that help isn't too far away.