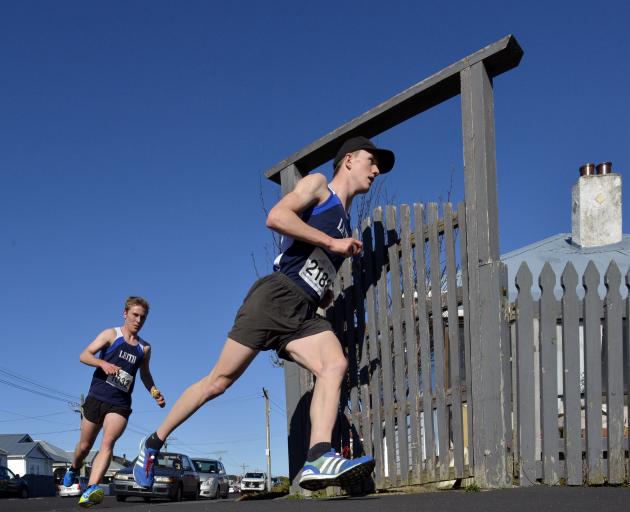 Janus Staufenberg keeps close to the fence line as he turns from Plunket St into Richardson St during the senior men’s 10km road race around Forbury Park on Saturday. Behind is fellow Leith runner Nathan Hill, competing in the men’s under-20 race.PHOTO: GERARD O’BRIEN
Cross-country and road doubles were the order of the day at the Otago road championships on Saturday.

Janus Staufenberg (Leith) and Rebekah Greene (Hill City-University) backed up victories in the Otago cross-country with dominant performances on the streets surrounding the Forbury Park Raceway.

Both opened commanding leads throughout the first half of the 10km course, then consolidated them.

Greene (25) admitted taking a low-key approach to have a break in training since winning the Otago cross-country last month.

But she showed no evidence of being under-prepared on Saturday.

"It was a big shock to the system," Greene said of her victory.

"The first 5km was good. The second was tough."

Greene said she was taking a casual approach to the road season before building up for the track season in which she will look to contest 1500m, 3000m, and 5000m.

"I will have a bit more focus on the 5km. So I just need to remind the body it needs to push hard,"she said of using Saturday's race as part of her base-loading process.

"Maybe I'll look to giving the Australian season a bit more of a crack this year."

Staufenberg (20) cleared away from the senior men's field right from the gun.

By midway, his lead was out to just over a minute on newcomer Simon Cromarty, who had established a 25sec margin over marathon runners Jonah Smith (Caversham) and Nic Bathgate (Leith).

Staufenberg said it was a case of just ticking off each of the five laps and digging deep over the final two.

His quick start found him soon in touch with the junior men's 8km runners who started ahead of the senior 10km event.

He said he found momentum with his pace by picking them off and was able to work with leader and Otago 1500m champion Nathan Hill (Leith).

As Hill crossed to win the 8km junior men's under-20 event, Staufenberg found himself alone at the head of the field for the final 2km lap.

He crossed to finish in a smart time of 31min 52sec.

"There wasn't too much left to be honest," he said of now being in the midst of a block of triathlon training in preparation for the upcoming season.

Cromarty finished second in 33min 32sec and Smith was third in 33min 58sec.