The physiotherapist led from the start and came home in 2hr 54min 51sec, 15min clear of fellow Dunedinite Sonya Cameron.

"That race lived up to everything I have been told - it was just spectacular," Campbell says.

"I am just so pleased those heavy showers stayed away. Conditions were perfect, just ideal."

Campbell said she ran with some of the men's field at the start, but was on her own for much of the race after the halfway point.

"I was just looking around enjoying the view and just rolling. I really wanted the win today. I am stoked.

"It is a little bit slower than a lot of marathon courses, but I wouldn't change it for anything." 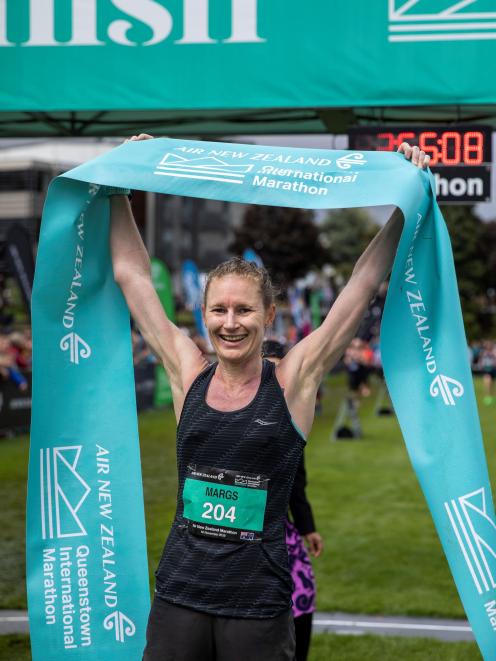 The runner, who has dual British and Swiss citizenship, moved to Auckland a week ago.

"I loved that today," Downs said.

"What an amazing course. It is so nice to run on soft ground and not hard tarmac all the way.

"I was in second until about 25km or 26km and I saw the lead guy and was feeling quite strong still. I was quite happy with how the race turned out and how I was pacing it."

About 12,500 runners took on the various distances for the sixth Queenstown International Marathon, sponsored by Air New Zealand.

The day began with light to moderate rain, which continued to fall intermittently throughout the morning, the sun poking through at times.

It made for good running conditions, though, with little or no wind and mild temperatures. 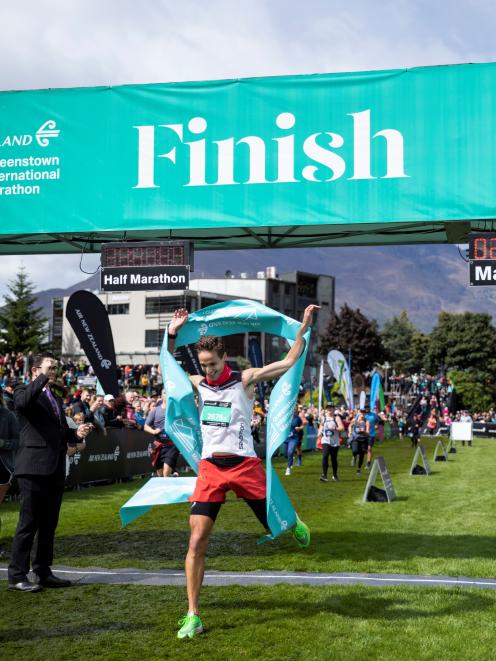 Men’s winner Fabe Downs crosses the line.
In the half-marathon, Daniel Balchin dominated an event he has now won three times in succession.

The Cromwell athlete knows the course well, and loved the perfect running temperatures.

"It is sort of my home course now; I live in Cromwell so it would be rude not to keep coming back.

"The weather conditions were ideal for running, raining a little at the start but it stopped during the race and stayed nice and cool."

Balchin finished almost a minute outside his race record but was also taken by the scenery on offer throughout the course.

"I was on record pace until about 6km to go but the wheels fell off a little.

"This is a beautiful place. I come out here and do my Sunday long runs here as I enjoy the trails and the beautiful scenery by the lakes. It is a great place to run."

Jess Kikstra (Christchurch) took her good form from the cross-country circuit to the half-marathon course, running to victory in 1hr 26min 18sec, despite just missing the race start.

"I actually missed the start so started by myself and was chasing everyone. I don't have a watch or anything, so I was just looking to stay calm.

"This is my first half on a flat course. I am normally a triathlete or cross-country runner. The weather was great, and conditions underfoot were fine, despite the early showers."

Paralympic athletics star Liam Malone flew home in the half in an impressive 1hr 34min 44sec.