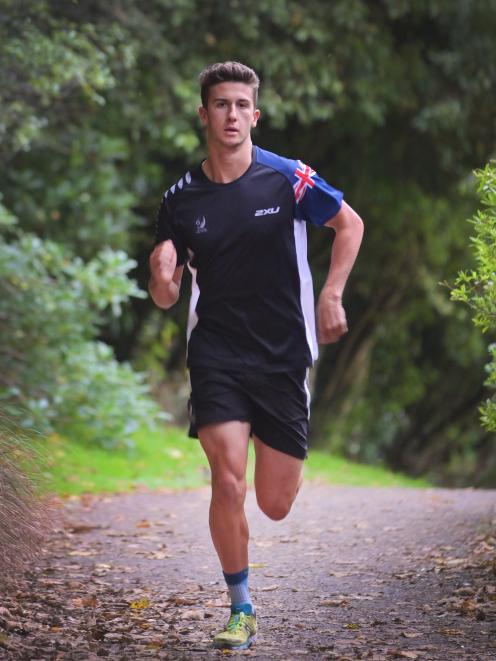 U20 Cross Triathlon champion Matthew Clough gets in a training run earlier this week. PHOTO: CHRISTINE O’CONNOR
Matthew Clough does not see himself having a career as a professional sportsman.

But he would like to weave sport into his business ambitions.

The 18-year-old University of Otago commerce student can call himself a world junior champion.

He earned that right following a tremendous battle with Frenchman Jules Dumas at the ITU World Multisport Championships in Spain earlier this month.

Clough eventually pulled away on the run to win the World Under-20 Cross Triathlon and beat Dumas by 1min 41sec.

But the final margin is misleading. The pair jostled for the lead throughout the race, but briefly put their rivalry on hold to work together on the cycle to clear out from the rest of the field.

Clough was first out of the water. Dumas caught up on the bike and they rode together for a good portion of the leg.

Dumas broke the truce in the last few kilometres, and built a 55sec lead going into the final leg - a 7km run.

"I thought to myself, do I go now or hold back and try and catch him just before the end," Clough said.

"But I thought I'm just going to go now. I caught him within about 3km of the run.

Clough could see his opponent was struggling, so attacked and pulled away to win.

"I got second last year, so I was really gunning for a first title."

Clough has been competing in triathlons for five years. He was a competitive swimmer "growing up" and got "sick of following the black line every morning".

"I thought what else can I do. I could run, so I picked up cycling and went from there."

While Clough appears to have a bright future in the event if he chose to pursue it further, his focus is elsewhere.

"I don't see myself as a professional sportsperson. I have other career goals but it is something I really enjoy doing."

Clough, who hails from Ashburton, is hoping his commerce studies will open up business opportunities. He likes the idea of becoming an entrepreneur and perhaps doing something in the sporting realm.

"Whether that is working for a sports company or coming up with new sports product - I reckon that would be quite awesome."