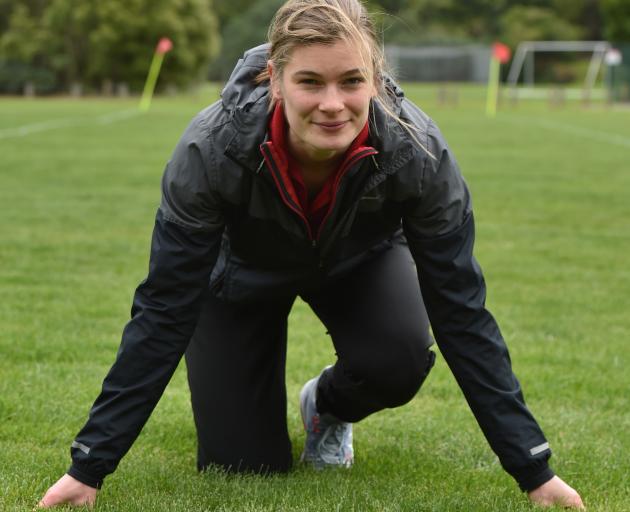 Rosie Elliott (21) prepares for a training session at the Caledonian Ground yesterday after running a fast personal best last weekend. PHOTO: GREGOR RICHARDSON
Rosie Elliott has had to re-think her plans for the season this week.

The 21-year-old student had initially thought she would have a go at the 400m and heptathlon.

Then she went and became the 17th fastest woman in New Zealand history over 100m.

Her time of 11.68sec at the Caledonian Ground last Saturday smashed her previous personal best of 12.07sec, which she set a week early.

It also took her to second on the 2019 national rankings, behind only world championship sprinter Zoe Hobbs.

That is a huge improvement, one that was far more than she had expected.

"That was actually my goal for the season, just to break 12 [seconds]," she said.

"I'd definitely been told I was looking faster.

"I personally didn't want to get my hopes up, because you don't want to in case you're disappointed.

"But other people in my squad had said they thought that was coming.

"But I personally didn't expect it."

Perhaps even more remarkably, Elliott has only been back running for less than a year.

After sprinting and dabbling in high jump in school, she had a break from the sport midway through 2014.

Injuries had been a big factor in that, notably a shin splint-type issue which was leaving her unable to walk properly.

She arrived in Dunedin from Christchurch for university in 2017 and played rugby for Carrington College. In that she picked up a bad concussion, which forced her to sit out all physical activity for six months.

A period of inactivity followed and it was not until November last year she returned to the track.

That period had given her body time to heal, though. She had her first season of injury-free winter training ever, and

it had been more intense than she had done previously, while she had also made changes to her diet.

The results were clear to see.

Yet she did admit to feeling a bit of "imposter syndrome" seeing herself among the other names at the top of the rankings.

She hoped to back it up with some more fast times, pointing out the rankings were only reflective of a one-off performance.

One suspects she may even be able to go faster, although she is not getting ahead of herself.

"I don't really want to speculate.

"I'm just riding the wave at this point.

"But, to be honest, I'm so happy with that, I don't think I'd really mind if I didn't get much faster.

"Obviously it'd be nice to, but if I didn't it's a pretty feel-good time."

Elliott has one more exam next week, although is thinking of finding a job and staying in Dunedin over the summer.

She will be back for another two years to finish her science degree, double-majoring in anatomy and microbiology.