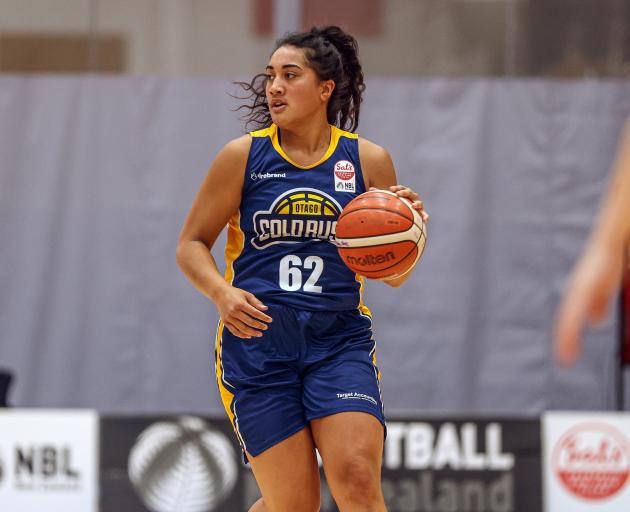 Te Araroa Sopoaga handles the ball on debut for the Otago Gold Rush during its National Basketball League game against the Harbour Breeze in Auckland on Monday. PHOTO: PHOTOSPORT
Te Araroa Sopoaga gets asked one question all the time.

It is the same one you probably just asked about the Otago Gold Rush guard as you read that.

Yes, she is Lima Sopoaga’s sister.

For some that might be intimidating upon moving to Dunedin.

But she does not feel pressured by following the All Black and former Highlanders star first five-eighth south.

Indeed she is quickly forging her own reputation.

In her first two games in the National Basketball League, the 18-year-old has been a stand out for the Gold Rush.

Her ability to drive aggressively has been key in creating shots for both herself and others, helping her to a league-leading six assists per game.

She will get the chance to further that reputation tonight in Auckland against her hometown Capital Swish, and tomorrow against the Auckland Dream.

Either way, the weight of her name is something she has embraced.

"It’s really cool people coming up to me and asking me," Sopoaga said.

"It’s cool to know the connections my brother made in Dunedin with other people and I can see how much of a good person he was to them and how good people are to him.

"I’m definitely lucky in that sense. I think it’s cool he made a good culture and a good name for himself down here.

"It’s not pressure; it’s cool to be able to carry my family name around.

"It’s more than just the rugby player that Lima was — it’s the culture and morals my family name has.

"I definitely appreciate it more now."

Sopoaga grew up in Wellington and won a national title with St Mary’s College in 2017.

She moved to Queen Margaret College a year later, before moving to Dunedin to study oceanography this year.

Alongside her brother’s influence she also had a lot of family in Dunedin as it was her mother’s hometown.

Basketball had always figured largely, although she also excelled at sevens, netball and volleyball — one of which she may get back into next year.

She had enjoyed playing in Dunedin and was influential for the South Pac Magic in this year’s club league.

The Gold Rush had been similarly enjoyable. She made her national league debut for the team on Monday.

She looked comfortable on court in two close losses, although she said it had been a big step up.

"I think it was the physicality. I definitely took a hit a few times in the game, but it was good fun.

"I think as well the IQ you have to have during the games in the pressure moments.

"[I’m] just trying to keep my head steady throughout the games."

Sopoaga was excited to play her hometown team tonight, which boasted several of the players from the St Mary’s national championship side.

Tip-off is at 7.30pm, as is tomorrow’s tip-off against Auckland.