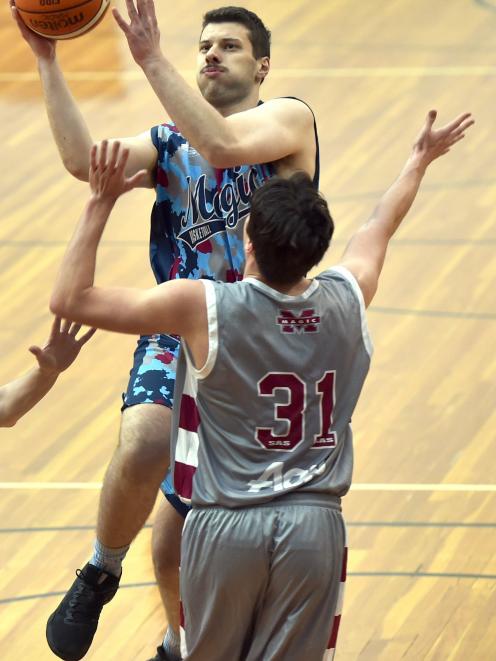 Magic Lions player James Scobie pops a shot over the head of Magic A player Joe Ahie during a premier basketball match at the Edgar Centre on Saturday. PHOTO PETER MCINTOSH
The City Rise Bombers took the win.

But it was Varsity that made the statement.

After two big losses to open the men's club basketball season, Varsity took the Bombers to the final seconds at the Edgar Centre on Saturday.

A Josh O'Connell three-pointer — banked in from the top of the arc — gave the Bombers the final lead late.

They closed out a 90-86 win. But it was the resurgence of a considerably stronger Varsity team that was notable.

Among the returners were former Nuggets guard Micah Lepaio.

He had 18 points and combined well with Isaac Smiler (22 points) and Joseph Euphrat (16 points) to give Varsity a handy big three.

That proved influential early, as Varsity shot well and surged to a 22-8 lead.

They found scoring from a variety of players, but the duo of Olly Smith (20 points) and Josh O'Connell (17 points) were key in the comeback.

The gap opened to 72-63 at the final break, Smith and forward Hayden Russell prominent late in the quarter.

But Varsity pulled it back once more. Its big three each contributed a three-pointer late in the game to reel in the deficit.

Lepaio hit the last of those — a turn-around fadeaway from the wing to make it 84-84.

However, O'Connell answered with one of his own. It may not have looked pretty as it rattled in off the glass, but it was three points, nonetheless.

From there the Bombers closed it out with free throws to move to 2-1 on the season.

In the late game the St Kilda Saints also moved to 2-1 with a 76-41 win over the Andy Bay Falcons.

It was an impressive defensive display from the Saints, made even more impressive by the fact the Falcons came within three points of the unbeaten Mid City Magic a week ago.

The Falcons’ shooters went cold and the side went scoreless in the first quarter.

It was a buffer the Saints were never going to give up. They did their damage inside, front-court duo Connor Coll and Lawson Morris-Whyte piling on 21 and 18 points each.