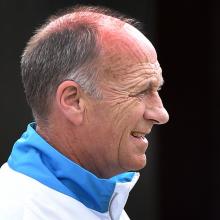 Mike Kernaghan
Dunedin's Mike Kernaghan fell at the final hurdle in the men’s fours final at the national fours championships in Alexandra yesterday.

Kernaghan and his composite four which also included Lance Pascoe, Shannon McIlroy and Kelvin Scott, went down to the Maurice Symes led four 20-19.

The final of 18 ends was a match which had various lead changes.

The Symes four, which included Steve Beel, John Gray and Craig McDonell, led 16-9 at one stage, but Kernaghan’s four got it back to be just two behind at 18-16 with two ends left.

It then grabbed three shots on the penultimate end to go ahead 19-18 with one end left.

But Gray delivered a fine bowl, which robbed Kernaghan of a shot and gave his side the two shot advantage. With the last bowl, Kernaghan put the jack in the ditch, but it still gave Symes the two shots to win the match.

It was the third year in a row when Kernaghan was the bridesmaid in the fours final.

In the women’s final, Mandy Boyd skipped her four to a win, beating the Sandra Keith-led four 20-15 in a final which ebbed and flowed.

The Boyd-led composite four, consisting of sister Angela Boyd at lead, Leigh Griffin, at two, Kirsten Edwards, at three and Mandy Boyd at skip, had trailed early before going on a huge run.

Boyd, from Christchurch, had bagged her sixth national bowls fours title with yesterday’s win, and most of them were with the trio she won with yesterday.

The four had been behind 8-5, but then went on an amazing run to get up to 18-8, and seemed to be out of reach for Keith and her fellow bowlers.

But Keith’s side did not throw in the towel.

But some fine draws from the Boyd-led team gave it the win and the title.

The four are a close-knit group and Mandy Boyd said good play by her colleagues enabled her to have an easy ride.

The win was her eighth national title across all formats, and her six fours titles had come in just 11 years. 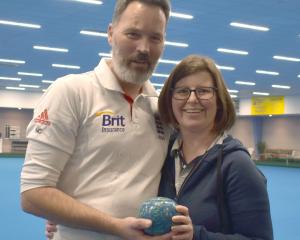