Gibson to debut for Dunedin in zone six event 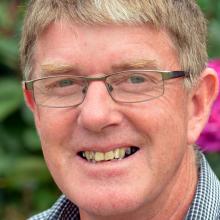 Robbie Gibson.
Robbie Gibson will make his debut in the elite Dunedin intercentre men’s team at Alexandra this weekend.

Gibson, the Taieri club’s green keeper, has been selected in the middle of the triples for the six-team zone six event.

Gibson was a talented athlete in his youth and won the New Zealand junior pole vault title in 1975.

The other newcomer in the Dunedin team is Callum Horwell (Kaikorai) who is the lead in the fours team.

"This is the first time the event has been played in this format," Dunedin chairman of selectors Jim Scott said.

"It will give the selectors the chance to assess the player’s temperament before we select the team for the national finals of the intercentre sevens," Scott said.

Players not available for the event this weekend were Rod Fleming (Forbury Park), who is injured, and Andy McLean (North East Valley), who has been competing at the PBA pairs final in the United Kingdom.

Ten bowlers will be demonstrating their skills on the Central Otago greens. The team will be reduced to seven for the national finals.

Pat Houlahan (Alexandra), who qualified for post-section play in the singles at the national championships at New Plymouth, will skip the Central Otago triples.

Sandy McNoe, who was in the winning team at the Festival Fours, will skip the South Otago triples.Craig McDonald (Awamoa), who won his 12th centre title in the pairs last weekend, will skip the North Otago pairs with John Smith as lead.

Newcomers in the Dunedin development team that is playing at Clyde are Adam McGregor and Karl Mason.