Harvey and McEwan in fine form 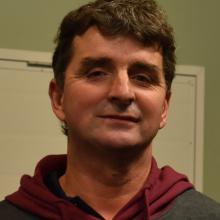 Harvey qualified for the final of the Potter's World Singles when he eliminated Joko Susilo (Andersons Bay) 11-2, 9-6.

On the other side of the draw, Karl Mason won an epic encounter against Russell Dawe (Kaikorai) 9-5, 4-9, 2-0 to earn the right to meet Harvey.

Mason was no match for Harvey in the final, however, going down 12-1, 8-3 and finishing runner-up in this competition for the second consecutive year.

Shortly after his singles victory, Harvey was straight back in the thick of competition with pairs partner Graeme Hislop (Forbury Park) in a thrilling encounter to find the regional qualifier for the Potter's World Pairs against the combination of Geoff Wilson (Kaikorai) and Beth Brown (Taieri).

Scoring four shots on the first end set, Harvey and Hislop won the first set 9-5, but then had to work hard in the second set as they clawed their way back from a 6-0 deficit after the first three of seven ends to win 7-6. 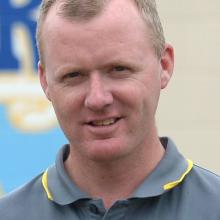 Brent McEwan.
As a keen Southland supporter, Harvey arrived in Dunedin on Saturday to take in the Ranfurly Shield match between Otago and Southland.

"We might not be taking the shield home, but at least I'm taking something back," he said of his two regional titles.

Winning the titles and qualifying for both singles and pairs at the national PBA championships ensures a busy weekend awaits Harvey at the Frankton Railway Bowling Club in Hamilton next month.

Should he win either or both he will earn the right to represent New Zealand at the world finals at Potter's Leisure Resort in Norfolk in January.

While Harvey was winning the world singles and pairs competition, on the other rinks McEwan was setting himself up for an early 38th birthday present in qualifying for the national final of the English International Singles in Hamilton next month.

He eliminated Oliver Mason (Forbury Park) 8-7, 8-4 in the semifinal and then had to stay focused and hold his nerve to defeat Paul King (Andersons Bay) in an intense final.

McEwan won the first set comfortably, but went down in the second set 11-5, putting the match to a tiebreak which McEwan won 2-0 to claim the title.

He earned the right to contest the final in Hamilton on September 14, his birthday.

Should he win that, he will then earn the right to contest the world final in Blackpool in February.

"I'm chuffed to win one after finishing runner-up in so many," McEwan said.

"I've been putting a lot of work in and it's finally paying off. You don't get many chances to win these."

He then headed straight into the final of the ranking singles against the ever-consistent Wally Shaw (St Kilda). The nagging consistency of Shaw prevailed 7-5, 9-9.

Six victories on opening weekend at the beginning of June set Dave Robinson (Fairfield) up with the rookie of the year award.