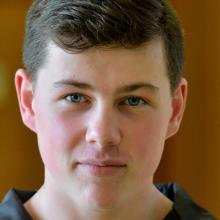 Jonty Horwell.
Jonty Horwell will make history at the weekend when he becomes the youngest bowler to represent Bowls Dunedin in an intercentre senior sevens team.

Horwell (18), an apprentice electrician, is lead in the men’s fours for the quadrangular tournament against Wellington, Marlborough and Canterbury in Christchurch.

It is the final hit-out before the Dunedin intercentre team is named next week for the national intercentre finals at Wellington in March.

"Jonty’s proved that he has got it by his form at the national open championships in New Plymouth and in interclub events," Dunedin selection panel chairman Jim Scott said.

"We have to develop players for the future  and have  a plan to encourage promising younger bowlers."

Horwell won the Dunedin open singles title last summer and, at the nationals in New Plymouth, he qualified for post-section play in all three events.

His best performance was in the fours in which he was beaten in the second round by a composite team skipped by World Bowls champion Ali Forsyth.

The other bowler not in last year’s intercentre team is Dave Archer who returns to the elite team. Not available from last year were Andy McLean, and former international Paul Girdler, who is based in Australia.

Horwell is the only member of the men’s team aged under 40. World Bowls champion Mike Kernaghan, former international Terry Scott and Archer are in their early 60s.

"Wellington and Canterbury have strong teams. It will be a good test for us," Jim Scott said.

The talented Sarah Scott has been given the singles spot in the women’s team after a successful year.

She was the best performed Otago women’s bowler at the national open championships. She reached the second post-section round in the singles and was beaten in the quarterfinals in the fours.

The only change from last year’s women’s team is the return of Beth Brown, who has replaced Sharon McCaw.

The other key players in the women’s team are Carolyn Webster, who will skip the pairs, and Janet Swallow, who is the fours skip.

The Dunedin women’s team is expected to reap the benefit of the new club structure that gives it hard competitive games each weekend.

It is based on the men’s weekly sevens competition and is preparing the female bowlers for the hard games ahead of them.