Scott just misses out on title

It was close. The national title eluded Sarah Scott and she will have to wait another year to join her family’s top table. 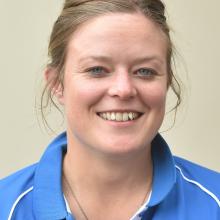 Eight members of her extended family have won New Zealand  titles and Scott (33) is keen to join them.

The other semifinal was won 18-17 by the strong women’s fours team of Black Jacks Val Smith, Jo Edwards, Kirsten Edwards and Tayla Bruce. They gained the narrow win over the composite team of Ann Loveridge, Marilyn Constantine, Dianne Patterson and Robin Rintoul.

But she was beaten by Reen Stratford (Aramoho) 21-19 in a cliff hanger in the quarter-finals.

Dunedin’s Jonty Horwell (17), an apprentice electrician, was a member of a composite fours team skipped by Bradley Down (Victoria, Wellington).  The other members of the team were Finbar McGuigan and Tom Taiaroa.

They beat Steve Hoeft (Pt Chevalier) 18-8 in the first round but were beaten by an Australian-based team skipped by New Zealand world champion Ali Forsyth 22-19 in a cliff-hanger in the second round.

This was no disgrace because the Victorian-based team included talented Australians Tony Wood, Paul Titcombe and John Young, who have reached this weekend’s semifinal.

Horwell and Down lost their first round post-section game in the pairs to a Palmerston North team skipped by Colin Cherri 17-10.The Kaikorai bowler also lost his first round singles to Eric Pattillo (Tauranga South) 21-7. Pat Houlahan (Alexandra) lost the first round to Wally Marsic (Carlton-Cornwall) 21-12.

Southland farmer Roger Stevens (Waikiwi), who is also a member of the North East Valley club, was in Gary Lawson’s composite four that lost the quarter-final to Forsyth 21-12.

Sheldon Bagrie-Howley (Gore) skipped a composite four that lost to Dean Elgar (West End) 17-16 in the second round.In the women’s pairs, Carolyn Crawford (St Clair) and Ann Muir (Northland), who won the title at Dunedin three years ago, were beaten in the second round by Catherine Bien and Sue Curran (St Helliers, Auckland) 15-14.

They were in a composite fours team that beat Judi Moyle (Composite) 19-15 in the first round and Janice Ropitini 22-14 in the second round.

They lost the quarterfinal to a composite team skipped by former Black Jack Lisa White 24-12.