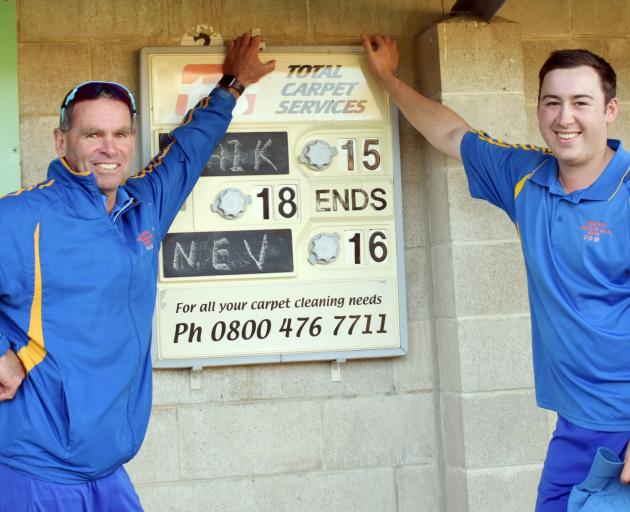 The North East Valley pair of Roger Stevens (left) and Keanu Darby at the scoreboard after winning the Bowls Dunedin champion of champions pairs title 16-15 at the Kaikorai Bowling Club last evening. PHOTO: WAYNE PARSONS
There was double celebration in the Stevens household when Roger combined with North East Valley clubmate Keanu Darby to win the champion of champions men’s pairs at the Kaikorai Bowling Club last night.

Weather and track conditions were more settled that those endured by Roger’s wife, Bronwyn, at Balmacewen last Sunday when she won the champion of champions women’s pairs title with Sarah Scott.

The victories gained both North East Valley teams entry into the New Zealand champion of champions pairs in Dunedin in July.

But a pathway into the national event proved no easy task for Stevens and Darby last night, as they had to fight tooth and nail for every point.

Stevens’ lead bowls often laid a perfect platform for Darby to score from as skip, but the never-say-die response from Kaikorai pairing of Nigel Birkbeck and Jonty Horwell kept the scoring close.

Just as it appeared the North East Valley pair was set to place some good numbers on the board in the 18-end encounter, Birkbeck and Horwell responded in kind to keep the game close.

Only on the 14th end did some separation begin to appear between the two clubs. With the game locked up at 10-10, Stevens set up the end to score two with Darby covering to lock out the Kaikorai pair from the head.

The two teams then exchanged points on the next two ends before, in the penultimate end, Birkbeck and Horwell combined to score four and steal a two-shot lead.

Stevens drew two shots on the final end to set up the possibility of a tiebreak, but Darby had other ideas and drew a third shot with his second of three bowls.

A drive to clear the head from Birkbeck went wide, handing Darby and Stevens a 16-15 victory.

Stevens said the goal going into the final end was to draw two shots to force a tiebreak, but such was Darby’s placement of the third scoring shot after he switched hands, it gave the Kaikorai pair nothing to play and limited their options.

The win came in a more relaxed frame of mind for Stevens this time round as last year on the same green he won the open pairs title with Darby just hours after arriving back from the Gold Coast and a 3½ drive from Queenstown Airport.