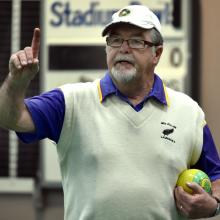 Ken Walker checks on the situation at the head during his match against fellow Dunedin bowler Duane White during the PBA regional championships at the Dunedin Bowls Stadium yesterday. Photo: Peter McIntosh.
The old Dunedin master bowler Ken Walker pulled out his bag of tricks to win his first PBA regional title for two years at the weekend.

Walker (71) won the world singles qualifying event in 2015 but was hobbled by an injured Achilles tendon last year and played a match in his wheelchair and wearing a moon boot.

He proved late on Saturday night that there is still life in his bowls when he beat Dunedin youngster Oliver Mason (23) 6-9, 8-5, 2-0 in the final of the International singles at the Dunedin Bowls Stadium.

"I’m delighted and pleased with myself," Walker said.

Mason (23), a duty manager at Centre City New World, has been a member of the New Zealand PBA for three years and won a regional ranking singles event in 2015.

He was keen to emulate his twin brother Elliott who beat international Andrew Kelly in the ranking singles last month.He started strongly and comfortably won the first set 9-6 and was leading in the second set 4-2 after five of the nine ends.

Mason had control of the jack at this stage and was playing long ends.

"I was always under pressure on long ends and just tried to limit the damage," Walker said.

"Oliver was playing better and I was just grafting away."

Walker understands how to apply pressure to an opponent and upset his rhythm. He did this on the sixth end of the second set when he draped four shots around the jack.

"I put pressure on Oliver and forced him to play heavier shots and he didn’t connect with any of them," Walker said.

The game changed on this end when Mason missed two of his drives and Walker added the bonus shot with his last bowl to add four shots to his score card and lead 6-4.

It gave Walker control of the jack and he played his favourite short ends by taking the mat up the green.

"I always feel confident of getting within 5-6cm of the jack."

Walker won the set 8-5 to force the tie breaker and played the shot of the game on the first end when he trailed the jack back to his own bowls when Mason had three shots on the head.

On the second end Walker put his first two bowls around the jack and Mason missed with his two weighted shots.

Andy McLean (Dunedin) caused a major upset when he beat international Andrew Kelly (Christchurch) 6-6, 12-2 in the first round.