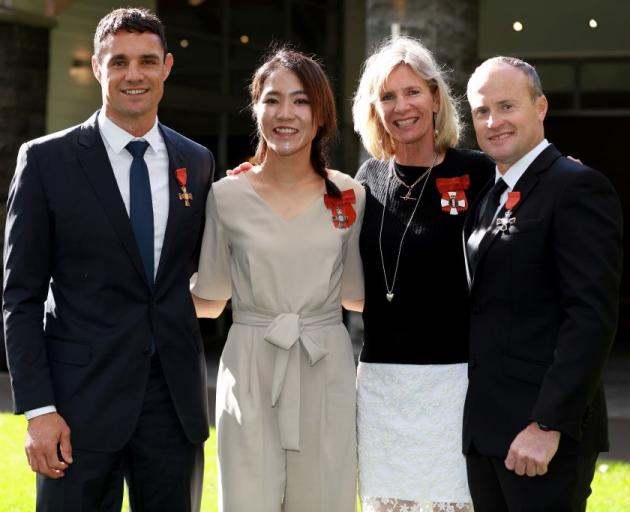 Some of New Zealand's sporting greats were celebrated during an investiture ceremony at Government House in Auckland today.

Former All Black Dan Carter, golfer Lydia Ko, Olympic great Barbara Kendall and America's Cup skipper Glenn Ashby were all honoured for their services in sport by the Governor-General after being named in the New Year and Queen's Birthday honours lists.

Carter, who made his All Blacks debut in 2003 to later lead the national side to consecutive Rugby World Cup triumphs, became an Officer of the New Zealand Order of Merit for services to rugby.

Still wearing a neck brace following surgery, the 112-test veteran described receiving the award as a special moment among his many rugby achievements.

"It's a huge honour to have played for the All Blacks and represent New Zealand for so long," he said after the ceremony. "To be recognised with something like this is really special.

"It's not the reason you play, but now that I've retired from international rugby, to be recognised for something like this is really humbling. It's something my children can grow up and be proud of."

Carter said his recovery was going well, revealing he had even sought some advice from All Black Sam Cane - who fractured his neck playing against South Africa last year.

"I'm still recovering from neck surgery about five weeks ago," he said. "It all went well, which was pleasing, and I just want it to heal well, hence the reason I still have the neck brace on.

"I've been talking pretty closely with Sam Cane and how he's had to deal with it, so he's been giving me some encouragement."

Meanwhile, Ko took time off from her busy international golf schedule to return to New Zealand for the ceremony.

Awarded Member of New Zealand Order of Merit for services to golf in the New Year's honours, Ko said it was beyond anything she could even dream.

"It's something you can't even dream of so you can't even say it's a dream come true, it's just an unbelievable thing for me not only as an athlete but as a person. I'm definitely proud to be standing here."

Kendall, who contested in boardsailing at five Olympic Games and has served on the International Olympic Committee, was made a Companion of the New Zealand Order of Merit for services to sport in the New Year's honours.

Former Oracle coach and Australian, Ashby was made a Member of the New Zealand Order of Merit.

The poacher turned gamekeeper from a New Zealand point of view, joined Emirates Team New Zealand in 2010 before skippering them to America's Cup glory in 2017.