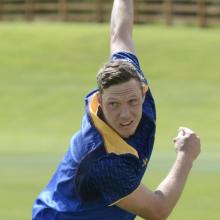 Matt Bacon.
An intriguing final day awaits as Otago seeks to finish the season on a high.

Auckland batted all of yesterday in the Plunket Shield match at the University of Otago Oval.

After scoring 268 runs yesterday the visiting side is behind by 38 runs after a lengthy opening second-innings partnership was broken just before stumps yesterday.

Auckland will resume on 198 for one wicket and Otago will have to either take nine Auckland wickets and chase down a total or it may have to give Auckland some easy runs to encourage the opposition to set a target.

In the morning session yesterday, Otago dismissed Auckland for 247.

Otago had made a hefty 483 in its first innings and Auckland was struggling at stumps on Monday night on 177 for six wickets.

Best for the Otago bowlers in the first innings were Jacob Duffy and Matt Bacon, who took three wickets each. Nathan Smith helped himself to two to keep up his top efforts this summer.

Auckland openers Sean Solia and Graeme Beghin were strong in striking the ball and finding gaps in the field.

Otago toiled hard and changed its bowlers at regular intervals but the breakthrough would not come.

Beghin up his first century at this level off 160 balls, 86 of his 100 runs coming in boundaries as he made the most of the fast outfield and Otago's attacking field. He finished the day unbeaten on 110.

Solia worked hard also but, as the game headed towards stumps, the two Auckland openers got becalmed and did not score a run for more than seven overs.

Bacon then bowled a quality ball in the third-last over of the day which moved away from Solia and took his off stump out of the ground. Matt McEwan came in as nightwatchman.

In the other game in Hamilton, Northern Districts batted all day and ended up on 463 for six wickets, giving the side a lead of 376 runs over Central Districts. Dean Brownlie scored a century and Mitchell Santner grabbed a breezy half-century.

Northern Districts is well placed to set a target early in the morning. Central will try to finish the season with a victory as it goes out as the Plunket Shield champion.