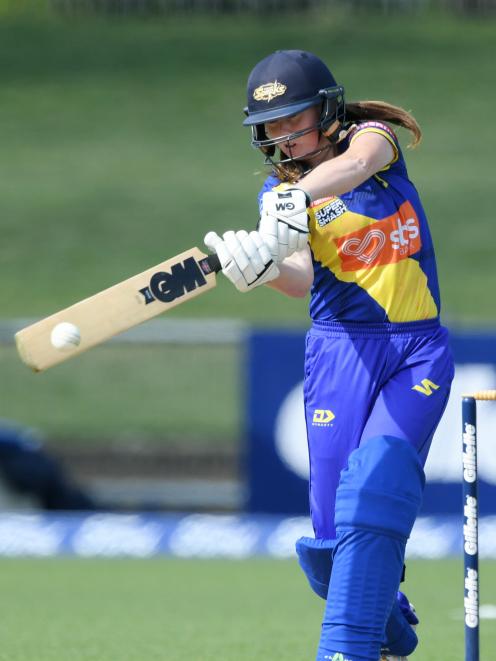 Australian Amanda-Jade Wellington has made an impact with bat and ball since joining the Sparks. PHOTO: GETTY IMAGES
A chance to beat Canterbury is always a good opportunity.

But Otago’s match against its rival in Christchurch today is utterly meaningless in the grand scheme of the season.

The Sparks have already qualified for the playoffs and cannot improve their position one inch.

Win or lose they will still head to Auckland tomorrow to play the Hearts in the elimination final on Thursday.

The winner of that game will earn the right to play runaway competition leader the Wellington Blaze in the final on Saturday.

The Blaze secured a home venue for the final with a perfect run during the round-robin phase. It won all 10 games and will take some beating.

Sparks coach Nathan King conceded it was a little hard to focus on the match against Canterbury given the team has a much bigger game on Thursday and hopefully Saturday.

He has named the same 12 but there will be some experimentation within the line-up in what is basically a dress rehearsal.

"It is about putting a performance on the board that we can say to ourselves that that is going to be capable of winning us [the elimination final]," King said.

"But we’ll look at doing somethings slightly differently just so we can give players some opportunities — whether that is a couple of overs or a bit of time out in the middle.

"We will look to try and do that where we can."

The Sparks have won four and in a row and are keen to keep that streak alive.

"Whilst in the bigger scheme of things the outcome does not matter, we still want to win. Hopefully this is an opportunity to gain even more confidence."

Otago has certainly hit some good form in the second half of the tournament, albeit against easier opponents.

The arrival of Australian all-rounder Amanda-Jade Wellington has boosted the attack. She is a quality leg-spinner but has made a big impact with the bat as well.

She helped the Sparks defeat Central Districts in a must-win match in Dunedin on Saturday with a measured knock of 37 not out.

Fellow Australian Hannah Darlington starred with three for 12. The 17-year-old is timing her run nicely as well.

Opener Millie Cowan has struck back-to-back undefeated half centuries at the top of the order.

Bates missed out against Central Districts but is the country’s premier batsman. She is the competition’s second-leading scorer with 436 runs at a strike rate of 137.53. The 32-year-old has played more than 300 T20 games and is big-game player.

Canterbury is having a lean year and will rely heavily on captain Frankie Mackay to post a decent total.