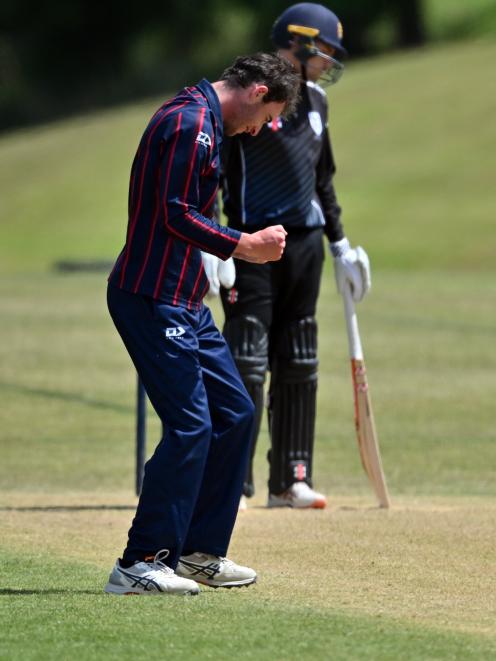 Carisbrook-Dunedin held on to clinch a tense six-run win against Kaikorai at Bishopscourt on Saturday.

Otago opener Camden Hawkins and No4 batsman Jack Pryde put on 140 for the third wicket to help Carisbrook-Dunedin post 256 for nine.

Both were dismissed in the 90s. Hawkins was run out for 94 and Pryde was caught for 91.

But the disappointment of missing out on a century would have evaporated a few hours later.

The visitors survived a bold and unbroken last wicket stand by Tom Sinclair (18 not out) and Ben Seavill (23 not out).

The pair put on 38 and threatened to drag Kaikorai through to a dramatic win.

Hawkins (two for 38) and Pryde (three for 36) made a big impact with the ball as well to cap off a good day for the duo.

Earlier Charles Hendry stroked 51 to nudge the home towards the target, and Ryan Whelan was the most successful of the Kaikorai bowlers with four for 55.

Tasman-Jones made a patient 90 to help his side reach 231 for nine and then took three for 10 from four overs.

The loss has weakened Taieri’s spot at the top of the one-day standings. It is now joint leader with North East Valley but Valley has a game in hand.

Tasman-Jones had good support from former Otago all-rounder Sam Wells. Wells, who emerged from retirement this season, struck 50 from 53 to get the strike rate heading in the right direction. And Otago seamer Matt Bacon clouted 29 from 14 balls to add the cream.

The home team was all out for 141 in the 40th over. Volts contracted player Dale Phillips top-scored with 65 from 74 balls and Ben Lockrose held up an end with 34.

But no-one else was able to made a significant contribution with the bat for Taieri.

Tom Griffin swatted four boundaries and four sixes in an undefeated innings of 68, and Sean Dykes anchored the chase with a measured dig of 65.

Kneebone played more or less a lonehand with the bat for the home team.

His 102 came off 137 bowls and included 13 boundaries and a six. Other than Gregor Croudis’ 31, Kneebone could not find much in the way of support.

The win has put North East Valley equal with Taieri at the top of the standings.