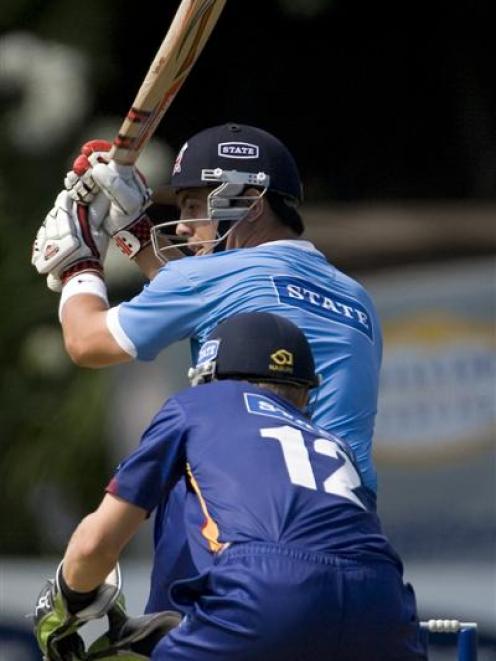 But ultimately Chris Martin's bowling proved to be the difference between last year's finalists at Eden Park Outer Oval yesterday.

With the scores tied, Paul Hitchcock hit the final ball of the match for six to help seal a three-wicket win for Auckland, its first victory in the one-day competition.

But it was Martin who laid the foundations for the victory with some superb bowling at the death.

Unwanted by the selectors for the test and one-day series against the West Indies, Martin took four for 33 from 8.5 overs to help set up the victory.

He caused most of the damage in the 49th over when took three wickets with five balls.

He removed Ian Butler then bowled Neil Wagner with a yorker next ball, and wrapped up the innings when No 11 Craig Smith feathered an edge through to former Otago gloveman Gareth Hopkins.

While Martin was running through the visitors' tail, Mascarenhas was prevented from wreaking further havoc and left stranded on 75.

He had been in imperious form and, had he had another six deliveries at his disposal, who knows how many more runs Auckland would have had to chase.

Otago medium-pacer Warren McSkimming was ruled out after injuring a hamstring muscle in the seven-wicket win over Wellington.

That proved crucial, with his replacement, Craig Smith, forced to bowl at the death and getting smashed for 21 runs in the 46th over.

That over, and Martin's bowling, swung the match in Auckland's favour.

Otago made a stuttering start with Brendon McCullum nicking out for four and Aaron Redmond joining him in the sheds when he edged Martin on 12.

But the visitors lost the next four wickets for 34 runs.

With the innings teetering at 125 for six, Mascarenhas and wicketkeeper-batsman Derek de Boorder formed a good partnership, guiding Otago through to 185.

De Boorder switched places with Hopkins last summer and has made a steady improvement with the bat.

His 35 yesterday was a valuable contribution and enhanced his reputation as a useful player.

Martin was the pick of the Auckland bowlers but left-arm spinner Roneel Hira put in an admirable performance with one for 36 from his 10 overs.

Promising Auckland opener Martin Guptill got the reply off to a cracking start with 58 from 66 balls.

At five for 165, Auckland was falling behind in the chase but a partnership between Steve Croft and Hitchcock proved ruinous for Otago.

Time for NZ to improve at T20: McCullum