Cricket: Otago gets ready for the long slog 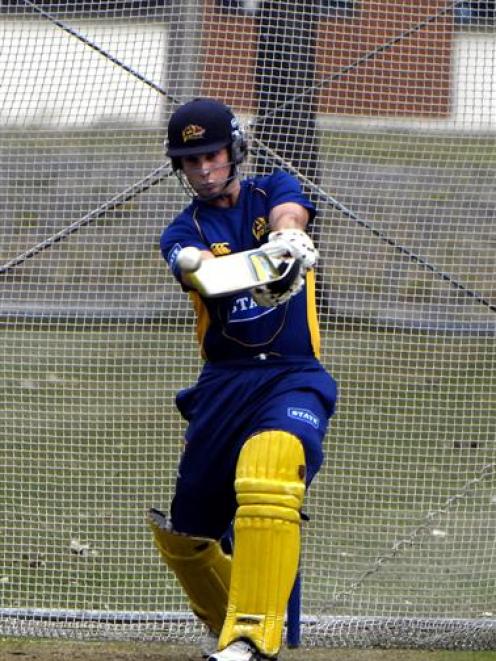 Otago top order batsman Shaun Haig gets in some slogging practice ahead of the twenty/20 match to be played today against Canterbury at the University Oval. Photo by Gregor Richardson.
Otago has put the disappointment of handing over the one-day title to Northern Districts behind it and has turned its attention to the razzmatazz of twenty/20. Cricket writer Adrian Seconi reports.

There might be a fat cheque riding on the outcome of the twenty/20 tournament but Otago coach Mike Hesson says prize money will not be a motivating factor.

These days, it is play four-day and one-day cricket for show and twenty/20 for dough - and lots of it.

The winner of the New Zealand domestic twenty/20 tournament is expected to be invited to the lucrative Indian Champions League in October this year where the winner will receive a cheque for $US3 million - almost $NZ6 million - and more than enough for Otago to quickly forget about its 49-run defeat in the one-day final.

That beats the $450 match fee the players will receive when Otago's campaign begins against Canterbury at the University Oval at 4pm today.

Potentially, it is a rags-to-riches story where there really is a pot of gold at the end of a rainbow. But Otago coach Mike Hesson insists the money is far from the team's mind.

"There is a heck of a lot of cricket games to be played before you even get a chance to make that event [Champions League]. So that certainly will not be a motivating factor," he said.

"We've got to put a team on the park that is ready to win [today] and that is certainly our priority."

Hesson said his team had put the disappointment of losing the one-day final to Northern Districts behind it and was looking forward to the opportunity of securing its first twenty/20 title.

"It took probably a day for everyone to heal a few wounds and get over the disappointment. There is no point dwelling on it.

We were disappointed, but we've obviously dealt with that and now we move on."

Twenty/20 was dismissed as a hit-and-giggle by its critics, but the latest format of the game is popular with the public, especially in India, where Indian Premier League games attract big crowds.

Arguably, it has not really taken off internationally. But the inaugural world championship in South Africa in September 2007 certainly lifted its profile on the world stage.

Otago disappointed finishing last in 2007-08 but was beaten in the final by Auckland the previous season.

"Some of the media have felt the game was a bit of a hit-and-giggle but the games has moved on from there and we've always taken it very seriously," Hesson said.

He is wary of Canterbury, which he rates as a good side. In the past, Canterbury sides have been encumbered with a large number of Black Caps drifting in and out of the squad.

But with fewer stars, the team is more stable and has produced some good results.

It made the one-day semifinal this season and won the four-day competition last summer.

Wellington has underachieved this summer but has an impressive line-up, and Northern Districts is on a roll after winning the one-day tournament.

The defending champion, Central Districts, will be dangerous, especially when Ross Taylor and Brendon Diamanti return from the Black Caps.

Auckland has felt the loss of star all-rounder Andre Adams and exciting top order batsman Lou Vincent and has been off the pace.

Otago seamer Ian Butler is officially the biggest hitter in New Zealand domestic cricket after smashing a delivery 95.98m during a batting competition at Eden Park on Monday.

Butler will defend his new title against six members of the public in a showdown in Wellington later this month.

Key player: Few players in the world are capable of stringing sixes together the way big-hitting all-rounder Dimitri Mascarenhas does.

Prospects: Otago struggled with the short format last summer and may labour to post enough runs.

Strengths and weaknesses: In the past Central has been too reliant on its Black Caps but has built some depth.

Prospects: Capable of beating any side and should feature at the business end of the tournament.

Strengths and weaknesses: It is a cliche but Northern really does have a good mix of experienced campaigners and promising talent.

It is also on a roll after winning the one-day competition.

Key player: Joseph Yovich is an underrated and experienced all-rounder, in a rich vein of form.

Prospects: Beaten finalist last year but Northern has the personnel to go one better this summer.

Strengths and weaknesses: Auckland is rebuilding after losing the likes of Andre Adams and Lou Vincent but has promising players coming through in Colin de Grandhomme and Roneel Hira.

Key player: Bowling all-rounder Paul Hitchcock on his day can be a destructive batsman and tricky bowler.

Prospects: Auckland is not the star-laden side it has been in the past and struggled in the one-day competition.

It will need to be more consistent to challenge in the twenty/20 tournament.

Strengths and weaknesses: Shane Bond aside, Canterbury has a decidedly average bowling attack but more than makes up for it with a potent batting line-up.

Key player: Opener Michael Papps has struggled with short-pitched bowling but he is a crucial component in the Canterbury side and capable of getting his side away to some good starts.

Prospects: Canterbury did well to make the one-day semifinal but does not look as strong on paper as some of the other sides.

Strengths and weaknesses: A formidable side at full strength but without its Black Caps the side is not nearly as threatening.

Key player: English all-rounder Graham Napier has been more effective with the ball but is just as dangerous with the bat.

Prospects: Wellington underachieved in the one-day tournament but has a quality line-up which will be bolstered by retired Black Caps captain Stephen Fleming.