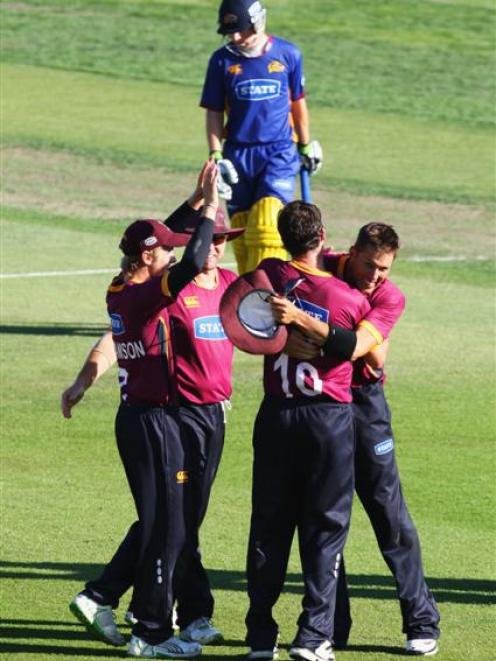 Northern Districts players celebrate winning the one-day final while a dejected Otago wicketkeeper Derek de Boorder trudges off Seddon Park in Hamilton on Saturday. Photo from Getty Images.
Disgruntled Otago fans may be wondering if Black Caps and former Northern Districts coach Andy Moles was part of a conspiracy to rob the province of its one-day title.

Otago coach Mike Hesson ruled out conspiracy but made little attempt to hide his disappointment.

"They have to make the call on the day who they deem to be the best players for the game, and I'm sure there is no conspiracy behind it. It is just very disappointing from our point of view," Hesson said.

In his absence, the largely inexperienced top order capitulated and Otago did not have a sixth bowling option, allowing Northern to pile on 97 runs in the final 10 overs.

Despite the loss, Hesson believes the experience should stand his side in good stead for the remainder of the summer.

Otago, the defending champion, had control of the game but a five-wicket bag from Graeme Aldridge and an undefeated 78 off 76 balls from Joseph Yovich saw Northern take the spoils with a convincing 49-run win.

"We played very well to get here [to the final]," Hesson said.

"And we bowled and fielded really well. We just didn't bat well enough, and pressure can do that to you at times. But our youngsters will be better off for it."

Northern Districts had slumped to 125 for six and the innings looked in tatters.

But Yovich batted superbly and Aldridge did his part with a cameo of 36 - his highest one-day score.

The pair added 64 for the seventh wicket to help their side reach 238 for nine.

Otago conceded 97 runs in the last 10 overs and, without a sixth bowling option, the attack wilted under the pressure.

Reliable medium-pacer Warren McSkimming bowled poorly and was smashed for 68 runs off his 10 overs.

Replacement captain Nathan McCullum bowled beautifully in the middle stages, taking one for 23 from his 10 overs.

But when the pressure came on he had little option but to continue with his specialist bowlers.

Yovich, in particular, cashed in, hoisting three sixes and whacking six fours in a gem of an innings.

At the innings break, both sides felt well placed.

Northern coach Grant Bradburn said his side had shown a lot of character to claw its way back from 125 for six and was quietly confident it had posted enough runs.

"As has happened all the way through this tournament someone stood up when we were in trouble, and today it was Joey Yovich and Graeme Aldridge. They got us through to a defendable total.

"Two-hundred-and-thirty-eight was a good score. The track was slowish and difficult to get slow bowling away on, and I knew we had two spinners up our sleeve."

Spinners Bruce Martin and Kane Williamson tied Otago down during the middle stages.

Otago made a disastrous start to its chase, crashing to 78 for five.

With most of its inexperienced top six watching from the sidelines, McCullum and English all-rounder Dimitri Mascarenhas attempted to resurrect the innings.

McCullum played nicely and looked in good touch, but the big-hitting Mascarenhas went into his shell and failed to play his natural game.

Rather than thrashing the ball to and over the ropes, he became over-cautious and blocked his way to 17 off 70 deliveries.

He seemed content to play the spinners out, and as soon as Aldridge came back into the attack Mascarenhas attempted to hoick him over midwicket and succeeded only in dragging the ball on to his stumps.

His innings sank what hope remained for Otago, although Ian Butler played a useful innings, whacking 44 off 23 deliveries at the death.

Earlier he had produced his best one-day bowling performance, taking five for 55 from 10 overs.

Had Otago won, Butler would have picked up the player-of-the-match award.

Instead, that went to his former Northern team-mate Aldridge.

The 31-year-old was in the mix to carry the drinks but that dubious honour went to Black Caps test batsman Daniel Flynn.

Aldridge made the most of his opportunity and starred with five for 39, including the crucial wicket of Mascarenhas.

"It was a big call to leave Flynn out. This was only the fourth game of the campaign for me so I needed to perform to repay the selectors' faith."

Yovich's innings aside, the batting was of a poor standard for a final which attracted a disappointing crowd of about 600.