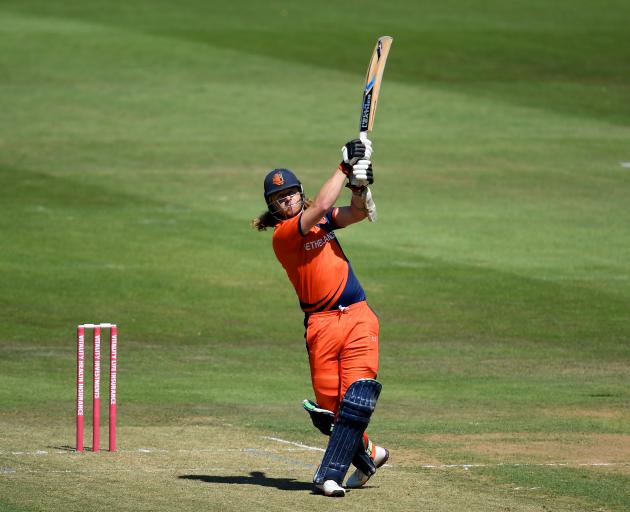 Max O’Dowd goes over the top for the Netherlands against Glamorgan last year in Cardiff. Photo: Getty Images
Has Otago uncovered another useful Netherlands cricketer?

The Volts played Canterbury in a warm-up twenty20 match in Christchurch yesterday.

Transplanted Aucklander Max O’Dowd guided Otago to a six-wicket win with an unbeaten knock of 83.

The 26-year-old right-hander has forged a decent career for the Netherlands.

His one-day international record is not half bad — he is averaging 145.

It is a very small sample of course. Both games were against Zimbabwe in June last year, and in his debut he swatted 86 not out to help his side post a seven-wicket win.

He was in good touch again yesterday.

Canterbury was dismissed for 163 and Otago overhauled the total with an over to spare.

Anaru Kitchen chipped in with 34, but most of the runs came from the blade of O’Dowd’s bat.

Volts coach Rob Walter said O’Dowd had come down to Dunedin with the ambition of cracking the Otago side.

He has linked up with the Albion club and made a good early impression.

All-rounder Michael Rippon is the other Dutch international in the squad and he had a breakthrough summer last season.

O’Dowd will be hoping his move South can spark his career. His father, Alex O’Dowd, played representative cricket for Auckland and Northern Districts in the 1990s.

Nathan Smith played an awfully major role in Otago’s win as well. He grabbed a couple of late wickets to finish with a five-wicket bag.

Canterbury had been on track to reach a score of about 180 or more. But Smith’s haul of five for 17 slammed the brakes on those ambitions.

The Volts will have the next week off and then assemble in Alexandra for a training camp.

The domestic season schedule has not been released yet, but Otago’s first-class campaign is expected to get under way on October 19.

Its release is being held up by the international schedule but the Otago Daily Times understands New Zealand Cricket will confirm details of the incoming West Indies tour today.