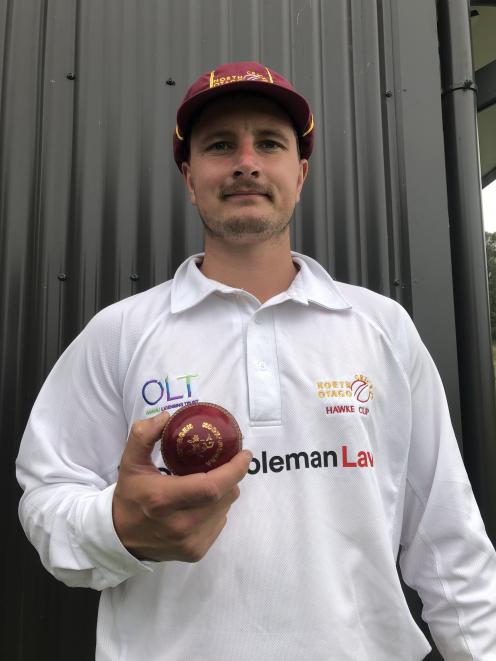 Jeremy Smith had a Hawke Cup weekend to remember. PHOTO: NICCI SMITH
North Otago cricketer Jeremy Smith is quite happy to be ranked alongside the great John Reid.

Smith produced the bowling performance of his career at the weekend, taking astonishing match figures of 13 for 52 to guide North Otago to a thrilling 11-run Hawke Cup qualifying win over South Canterbury at Centennial Park.

Only Reid, the New Zealand cricket great who played a couple of seasons for North Otago while based in Oamaru in the 1950s and took 13 for 51 against Ashburton County, has — by the smallest of margins — better match figures for the province.

"Not a bad bloke to be beside, is it?" Smith deadpanned yesterday.

Smith actually surpassed Reid in the first innings, destroying South Canterbury for 48 all out with figures of eight for 23, the second-best innings bowling figures in North Otago history and best in 96 years.

Reid had eight for 24 in a game, while the record of nine for 44, set in 1926, is held by T. Hargraves, according to research from North Otago historian Scott Cameron.

"If I’m being honest, I wasn’t feeling the best I’ve felt," Smith said.

"But it was just one those days when everything came off, and the boys took some good catches.

"The pitch offered a wee bit, so I was just trying to get the ball into it and let it do some work.

"It helped that I was bowling downwind, too."

Like most cricketers, Smith (26) keeps an eye on his statistics, and he would have taken pleasure in posting marginally better match figures than modern-day great Francois Mostert, who had hauls of 13 for 53 and 13 for 55 before returning to South Africa.

It is just a year since he took 11 wickets against Southland, and Smith’s transformation from a part-time medium-pacer to leader of the bowling attack, all while technically being North Otago’s premier batsman, has been dramatic.

It wasn’t necessarily that his bowling had improved but that he had got more opportunities since Mostert, Craig Smith, Ben Cant and younger brother Nathan, now playing for Wellington, had departed.

"I was sort of in that fifth seamer role for a long time and just bowled when they needed me.

"Now those guys have gone, I’ve had to take a bit of a step up, and I think the only thing I’ve really changed is I’m trying to hit the deck a bit harder."

Younger brother still gets a lot of the attention but Jeremy can likely forever claim bragging rights over Nathan when it comes to bowling performances for their home team.

"He’s got a couple of first-class five-fors, and a first-class hundred, so he can always pull those out.

"But I will definitely be bringing this up whenever I can. It’s pretty cool."

North Otago made a poor start, and had No 11 batter Cam Grubb (22 off 20 balls) to thank for scoring as much as 79 in its first innings.

Then, carnage. South Canterbury’s 48 was its lowest score against North Otago in 126 years of competition between the neighbours, as Smith took his eight wickets in 11.2 overs.

At 100 for two, South Canterbury appeared to be on track before Smith (five for 29) and youngster Tom Dempster (two wickets in two balls) sealed victory, rolling their opponent for 161.

"It got a bit tense, but we enjoyed it. We’ve had a couple of those tight games now so most of us are sort of used to it," Smith said.

"It was one of those games where it was just tense and tight the whole way. And it’s good fun to be part of those games. That’s why you play cricket, I think."

He shared in a partnership of 138 for the second wicket with Joe Ingram (68).

In reply, Auckland chases down its target with four wickets and four balls to spare.

On Saturday, Otago suffered a 31-run loss to Canterbury.

Matt Boyle scored 116 as Canterbury made an imposing 292 for nine.

Xavier Chisholm (47) led the response but Otago was dismissed for 261 off the final delivery.