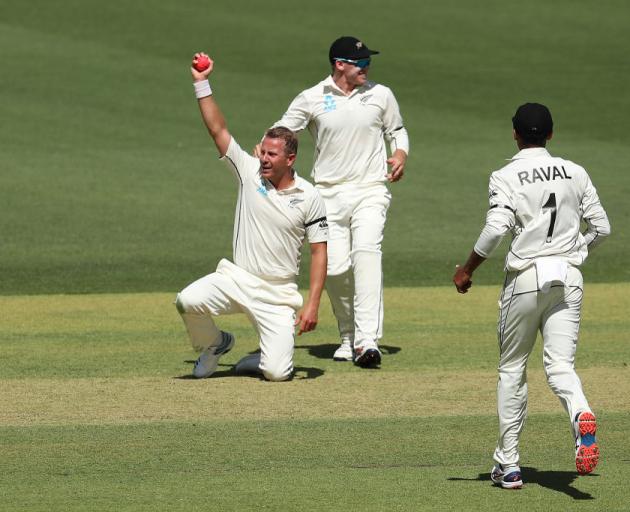 Neil Wagner of New Zealand celebrates after taking a catch off his own bowling to dismiss David Warner of Australia during day one of the First Test match between Australia and New Zealand. Photo: Getty Images

In-form Australia opener David Warner fell in spectacular fashion on the stroke of tea on the first day of the first test on Thursday as a weakened New Zealand pace attack fought back in a Perth Stadium furnace.

Warner, fresh off his unbeaten 335 against Pakistan in Adelaide, had threatened to bat through the first session of the day-nighter but was brilliantly dismissed for 43 by quick Neil Wagner, who plucked a sharp return catch in his follow through.

Australia, who won the toss and elected to bat, reached the break on 76 for 2 with Marnus Labuschagne unbeaten on 15 and former captain Steve Smith yet to score.

While the hosts were unchanged, New Zealand were dealt a major blow when spearhead Trent Boult failed to overcome a side strain and the shorthanded attack struggled in his absence for the majority of the session.

The tourists failed to probe until opener Joe Burns was trapped lbw for 9 by Colin de Grandhomme on the stroke of the drinks break. TV replays showed the ball missing leg stump but Burns elected not to review.

Debutant quick Lockie Ferguson was expensive with his first four overs, leaking 26 runs and sending one wild bouncer sailing over wicketkeeper BJ Watling to the boundary.

New Zealand, who have only won one test in Australia since their sole series triumph across the Tasman Sea in 1985-86, will want to keep their time in the field to a minimum with the temperature expected to soar to 40 degrees Celsius.

The weather/pitch:
It's a scorching hot 38 degrees in Perth right now accompanied by perfect blue sky. The pitch looks green at this stage of the game but is expected to quickly dry up and eventually form cracks by the time days four and five roll around.