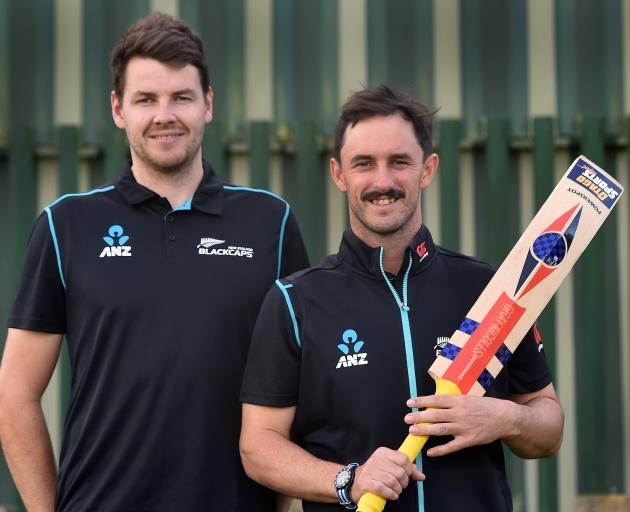 Otago duo Jacob Duffy and Hamish Rutherford leave for England at the weekend for the Black Caps test tour. PHOTO: PETER MCINTOSH
Jacob Duffy is very excited about getting his mitts on a Dukes cricket ball again.

Hamish Rutherford is less convinced by its so-called magical powers to swerve through the air and create chaos among batting line-ups.

The Otago duo leave for England this weekend for the Black Caps test tour.

A squad of 20 was announced last week.

Rutherford is not optimistic he will see much game time. But the left-handed opener is there as cover if needed.

Duffy reckons he should see some action in the first of the two warm-up games.

The right-armer had a tough Plunket Shield season. He picked up 13 wickets at an average of 54.84.

"Hopefully I’ll get a big load in that first game and that is the way I want it," he said.

The second warm-up game is likely to feature a stronger line-up and Duffy is not sure where he sits in the pecking order.

The squad will be cut to 15 ahead of the test series.

If Duffy does not make the cut, he is hopeful he will be able to secure a playing gig for a county. He does not have anything lined up, but has put the word out through his agent.

Whatever happens, he is looking forward to working with the Dukes ball.

"Statistically I didn’t have a very good season, I’ll be honest," Duffy said.

"But I felt pretty good. Stats don’t always tell the whole story. There was period in the season, specifically during the T20s, when I really fell out of form and I was struggling a little bit.

"But it is coming out well. My shape is there and I’m getting good movement. And obviously the Dukes is going to help too. That is always fun to bowl with.

"You are just in the game. It is glorious.

The overhead conditions play a big part in how much movement is on offer, so Duffy is hoping for plenty of grey days.

Rutherford described his chances of playing any of the games as "very slim". But with injuries, and perhaps Covid, he may find himself padding up.

Rutherford is bound to see some action, but probably at county level. He was not able to confirm whether he had inked a deal to play for a county this season. But he has previously played for Essex, Worcestershire, Glamorgan and Derbyshire, so he could pop up anywhere.

Rutherford had a decent red-ball season for Otago.

"If I do get an opportunity [for New Zealand], I’ve got to make the most of it, because you never know when your next one might be."

Rutherford played the last of his 16 tests seven years ago.

The Dukes ball does not frighten Rutherford.

"I think too much gets made of it. It definitely is different and definitely does more. But it gets talked about a lot."

Rutherford will be more worried if the overhead conditions look helpful. But on a sunny day with clear skies, it is just another leather sphere waiting to be hit.