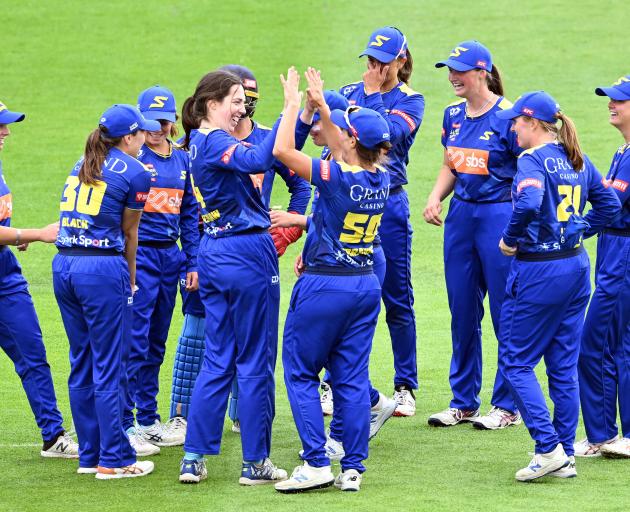 The Otago Sparks celebrate the fall of another wicket in their Super Smash elimination final against the Auckland Hearts at the University of Otago Oval in Dunedin yesterday. PHOTOS: STEPHEN JAQUIERY
The Sparks’ biggest challenge awaits tomorrow. 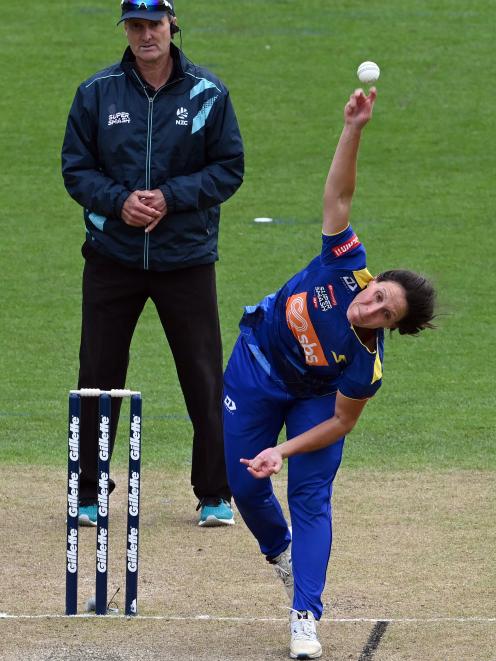 Kate Ebrahim gives it everything at the bowling crease.
But the Otago team will be glad to have navigated yesterday's road-block in convincing fashion.

Yet another quality Suzie Bates innings paved way for the team to brush aside the Auckland Hearts in their Super Smash elimination final at the University of Otago Oval yesterday.

Bates hit the Auckland bowlers all around the ground to compile 75 runs, the major contributor in the Sparks’ total of 143 for five.

It set the platform for a dominant 29-run win, set up by the Sparks bowlers holding the Hearts to just 42 runs in their first 10 overs.

The Sparks booked a spot in the final tomorrow against the unbeaten Wellington Blaze in Hamilton.

"It’s always interesting when you play a knockout game, how you approach it," he said.

"But I was delighted today when the girls turned up and it was no different. You talk about it being just another game of cricket, but it isn't really.

"I thought from the moment the girls arrived, the way we batted [so well] and I thought our first 10 overs with the ball were outstanding.

"They’ve worked really hard and they’ve earned themselves a great chance to go and enjoy a really special occasion in the final."

As they did two weeks ago in Auckland, Bates and Polly Inglis got the Sparks off to a strong start with the bat.

The pair put on 43 for the first wicket, Bates attacking aggressively and Inglis using her ability to play the ball behind the wicket.

However, unlike two weeks ago, the Hearts did break through.

Inglis had cut seam bowler Molly Penfold into a gap to pick up a double.

She tried again the next ball, but this time edged one through to keeper Izzy Gaze to be out for 19.

Bates continued to bludgeon the bowling attack all around, while Martin regularly found gaps in the Hearts field.

It was Penfold who ended that partnership as well, as Martin tried to cut her over the top, but was caught on the boundary by Bella Armstrong for 17.

The Sparks had several other cameos, but it was Bates who did the damage from there.

She kept the run rate high and had the team at 128 when she finally picked out Fran Jonas, while trying to innovate off Amie Hucker’s bowling in the 18th over.

The total of 143 was always going to be a tough total to chase.

That became even tougher for Auckland when in-form opening batter mistimed a shot off Emma Black and was caught by Olivia Gain for two.

The chase never really got going after that.

The run rate did not improve much as Otago began to change its bowlers and Auckland was at just 21 when Skye Bowden was bowled by Sophie Oldershaw in the seventh over.

At the 10 over mark the Hearts were just 42 for two, leaving them not even a third of their way to the target.

Katie Perkins hung around to make 24, but was run out as the Hearts looked to take a risk.

From there the Sparks cruised through, continuing to bowl tightly and taking a handful more wickets on the way to victory.

Arlene Kelly chipped in with a late 28, as Auckland finished well short on 114 for six.