There is still no clue as to whether New Zealand will go in with four seamers and a spinner and ditch the all-rounder yet.

But the selection picture has become a little clearer. 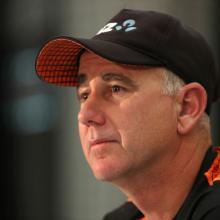 Spinner Mitchell Santner and in-form all-rounder Daryl Mitchell have been dropped from the squad of 20 which arrived in the United Kingdom for the two-test series against England.

Stead said settling on a final 15 was tough and it was particularly hard on Mitchell ‘‘who has done very, very well in all his opportunities’’ and Santner ‘‘who has been a longer-standing servant of the team’’.

But Ajaz Patel pushed his way past Santner in the pecking order with a quality performance in Edgbaston.

‘‘Ajaz bowled beautifully. I thought in both innings he did the role that we wanted him to do there and he picked up a couple of key wickets for us as well.

‘‘I think the wickets here deteriorate a little bit faster and the role of the spinner is probably one of a little bit more of an attacking option.

‘‘We felt we needed who we thought was our best spinner in terms of the guy who can take wickets for us and that is why Ajaz got the nod.’’

The next big decision Stead will need to make will be the make-up of the XI which takes the field.

Asked if it was as simple as a straight choice between Patel or all-rounder Colin de Grandhomme, Stead replied ‘‘not necessarily’’.

‘‘I think there is a whole lot of different scenarios that could still be depending on what [the pitch] looks like and what the weather is like.

‘‘And they could both play yet as well, so there are a number of options that we still have.’’

However, reading between the lines it appeared Stead did not have a huge appetite for playing all four seamers and the spinner. That would mean Kyle Jamieson would have to bat at No 7 — a spot Stead has previously said was too high for the 26-year-old at the moment.

‘‘I guess in time that is ultimately where we see that Kyle hopefully could end up.

‘‘Right now we’ll have to wait and see. It is one of the options that is on the table.

‘‘I guess when you face a side like India who are a very, very strong test team as well, you want to make sure you’ve got your best balanced team.’’

The captain Kane Williamson (elbow) and wicketkeeper BJ Watling (back) batted yesterday and ‘‘all signs’’ point to them being available.

They missed the second test against England to stay fresh for the WTC final.