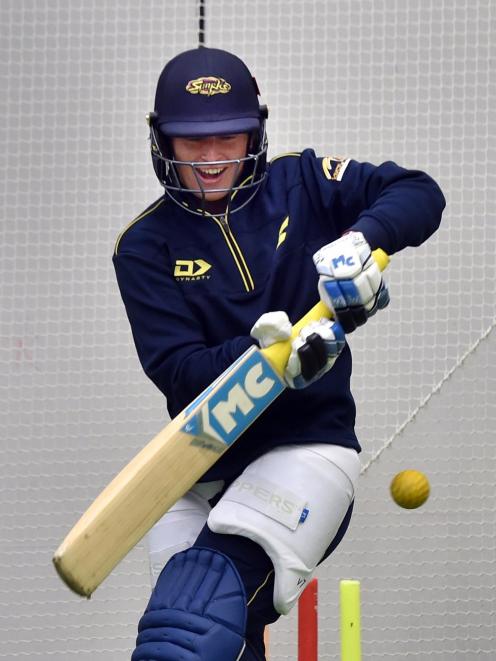 Otago Sparks cricketer Hayley Jensen gets in some batting practice at the Edgar Centre yesterday. PHOTO: PETER MCINTOSH
The Otago Sparks bowlers could not be blamed for being a bit daunted before Sunday.

It is just over a week since Sophie Devine hit a women’s twenty20 world-record 36-ball century against them at the University Oval.

That would be enough to shake anyone’s confidence.

Now they have to line-up against her and the Wellington Blaze again, this time at the Basin Reserve.

Experienced all-rounder Hayley Jensen, who opens the bowling for the Sparks, said it might be a bit daunting.

But she said it was important to remember world record innings are not going to happen every day.

Likewise, Devine had given the Sparks a chance which could have altered the game — she avoided a run out by millimetres in the first over.

Knowing those chances were there was reassuring.

It was just a case of being clinical in taking them.

"Yeah, probably get her out early," Jensen said of how to stop Devine.

"We have a couple of plans against her.

"Last game, obviously, we just bowled it basically in her slot.

"So just trying to bowl either where she can hit a one or she has to take a risk.

"Having a small boundary doesn’t help. She could just top-edge one and it might go for six.

"Hopefully, she can mis-hit one in the weekend but we’ve got plans to get her off-strike as well, try to starve her of that and we can target the other end."

Jensen has been enjoying getting some training in and felt her form was improving with it.

A New Zealander living in Australia, she had been part of the White Ferns tour there last year and linked with the Hobart Hurricanes in the Big Bash.

Having completed managed isolation on her arrival just two days before the Sparks first game, she had felt a bit of rust initially.

She had a rowing machine in her room, which Auckland Cricket had sent over.

But the cricket side of things took a while to come back.

"Just getting the feel again of bowling and just feeling bat on ball," she said.

"A couple of trainings in between that would have been a lot better.

"But you’ve just got to deal with what’s happening. At least we get to be playing, which is a lot better than some of the other countries."

She has since had a couple of outings with the bat, too, notably scoring 35 against a strong Blaze bowling attack in Dunedin.

However, she had been disappointed to get out at a crucial time late in the innings, after which the runs stalled.

Despite that, it was a solid batting performance from the Sparks on that occasion.

Jensen said if they could put on another 10-20 runs to reach the 140-150 mark, it would allow them to apply some pressure.

The Sparks enter the game in need of wins to make the playoffs.

They are in fifth place, on eight points, six points off the top three, with four games remaining.