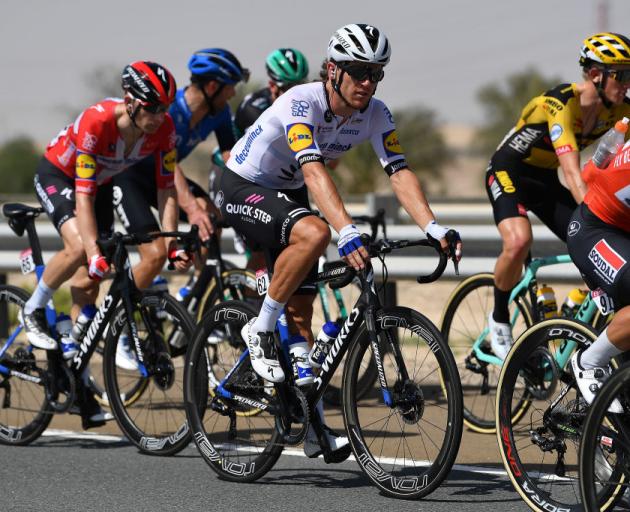 New Zealand's Shane Archbold (white shirt) competing in Jebel Hafeet this week. Photo: Getty Images
Three Kiwi cyclists have been caught up in the global coronavirus outbreak, with the UAE Tour - a high-profile cycling race in the United Arab Emirates - being cancelled after two staff members were confirmed to have been infected with the virus.

Shane Archbold, Jack Bauer and James Mitri were all competing in the UAE Tour, but after stage five was completed the trio were requested to stay quarantined in their hotel to undergo tests.

All riders and staff involved in the tour, as well as media and event staff, have all been told early on Friday morning not to leave their hotel, as fears emerge that the virus could spread amongst the cycling community.

The riders had earlier finished the fifth and decisive stage of the race, where the overall results are now likely to stand after the final two stages were called off.

"The decision has been taken to ensure protection of all the race's participants. Safety comes at the top of all priorities," the tour organisers said in a press release.

"In the meantime, the Ministry of Health and Prevention said that all the race's participants, administrative staff and organisers will be examined through the continuous periodic screening being conducted.

"All needed procedures, including quarantine measures, will be taken to ensure viral suppression and curb the spread of its outbreak in coordination with all health and other authorities concerned in the country."

Mitri's Vini-Zabu KTM squad revealed that their riders have been tested.

"Tomorrow morning we will know the results," the team tweeted. "It's gonna be a long night and we hope that everyone will come back home without any trouble."

An estimated 20 cases of the coronavirus have been discovered in the UAE so far.