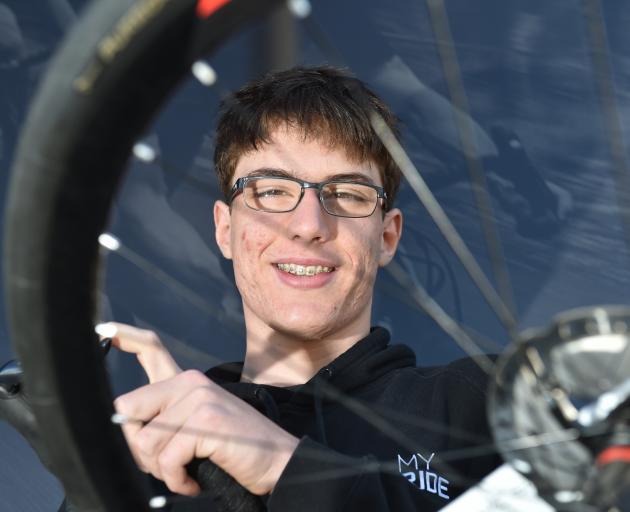 Promising cyclist James Gardner (16) won the under-17 boys time trial at the age-group road national championships in Rotorua at the weekend. PHOTO GREGOR RICHARDSON
James Gardner can picture the course in minute detail.

Every curve, every slope and flat piece of road is still vivid in his mind.

Funny that, because he would have been in tremendous pain at the time.

The promising 16-year-old cyclist scorched his way around the 16km time trial course at the age-group road national championships in Rotorua at the weekend.

He headed off Auckland’s Max Preece by almost 12sec to claim gold — an upgrade on the silver he achieved in the contest last year.

James also competed in the road race and was leading the pack in the sprint to the finish right up until the about the last 20m when he was overtaken and finished sixth.

The Otago Boys’ High School year 12 pupil got his timing marginally wrong on that occasion. But there is no doubting his ability.

His effort in the time trial is a clear indication the towering 1.98m teenager has the stamina and power to win more races.

And we know he has got the guts. He is also a very talented mountain biker.

You have to be brave, bordering on a little mad, to take on some of the downhill sections in mountain biking races.

Then there is his attention to detail. It is impressive.

Most riders would stretch to a sentence or three to describe what the course was like. Not James.

He had every section committed to memory and provided a long description when asked about the course.

Essentially it was undulating "which suited the climbers and people with lots of power", he said.

"I had to remember it. I went up a couple of days before and rode it. Knowing the track really helps so that you know where to push it and where you need to rest."

Late last year James won the under-17 race at the criterium nationals in Christchurch which is quite a different event from a time trial where you keep a steady cadence.

In the criterium you have to be able to explode into all-out attack and gear back down just as quickly.

It is a very different discipline, so James really has stretched out his versatility.

In January last year, he competed in the Oceania mountain biking championships at Signal Hill.

He competes in all three events — downhill, enduro and cross-country — although he favours the cross-country.

Mountain biking is plenty of fun but he prefers road racing and is also planning on giving track cycling a go at some stage.

In the meantime, he has joined the New Zealand Cycling Project team in a development capacity and is keen to embrace any opportunities which open up with the team.

"But there is no point getting too serious about it at the moment. I’m just having fun and don’t want to restrict myself [to one discipline]."

The next event on the horizon is the South Island secondary schools road championships in Christchurch in May.