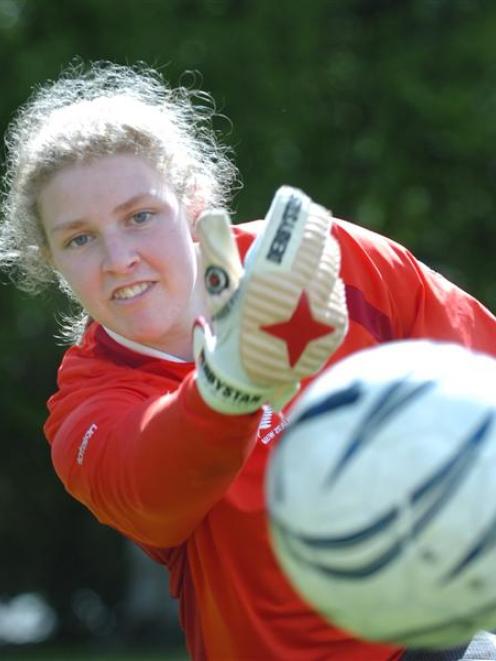 Goalkeeper Rebecca Brook has been selected in the Junior Ferns side which will contest the under-20 World Cup in Chile next month.
Since Rebecca Brook has taken up football, she has broken her thumb, dislocated a rib and suffered a bruised liver.

But it has all been worth it because the 19-year-old goalkeeper has been selected in the Junior Ferns squad which will contest the under-20 World Cup in Chile next month.

The University of Otago psychology student got the good news on Tuesday when the head coach, John Herdman, phoned.

"It was pretty exciting," she said.

She rushed off to tell her mother: "I'm going to Chile."

The Junior Ferns have been drawn in a pool with Nigeria, England and the home side, Chile.

The team is hopeful of progressing past the round-robin stage and Brook believes the games against Nigeria and Chile are winnable.

Brook, the only player from the Soccersouth region to make the squad, is not sure how much game time she will get at the tournament as she is ranked behind the No 1 keeper, Charlotte Wood.

But if Wood gets injured or loses form, Brook will be thrust into the big time.

Brook's football career started in the back yard of her family home where her brother, Adam, would spend hours kicking the ball around.

"I used to play around with my brother and stand in the goal and try and stop the ball. He broke my thumb when I was about 10," she said, laughing.

It was the first of many football injuries.

Her worst was a dislocated rib and bruised liver which sidelined her for eight weeks.

Attending the under-20 World Cup is a huge achievement but the next step is to make the Football Ferns squad and pursue a professional career in the United States.

"They've [United States] got a new pro league starting up next year and I want to work my way up to one of those teams, and the Football Ferns, hopefully."

It is where Hope Solo, one of the best female keepers in the world, practises her trade.

In the meantime, she will just have to settle for Chile.