Homecoming a boon for Stevens 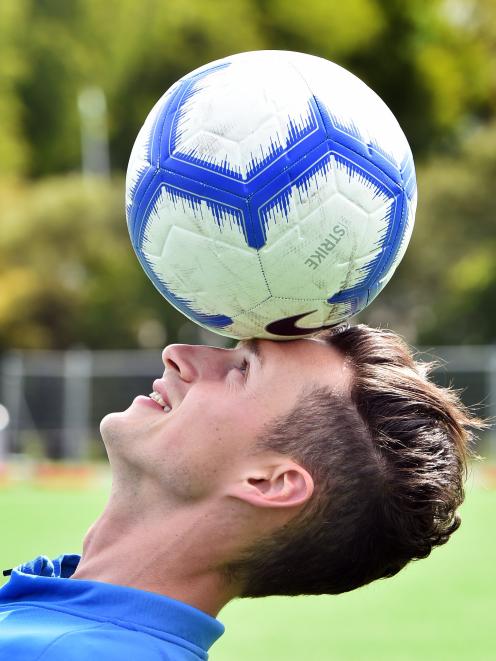 He wanted to get back to playing like he did as a child.

He wanted to see his family, get fit and work hard.

So he came home.

The 24-year-old has been back in Dunedin for about three months and is loving it.

He made a dynamic first-up impression on Saturday too.

The former All White was electric as he scored twice on his return to Southern United in a 4-0 win over Tasman United.

That will be an ominous warning for Canterbury United, which awaits in Christchurch tomorrow.

"It's awesome, it just felt like home to me," said of his first game.

"It was exciting. I had a massive shirt on as well.

"Back in the day I had an XL because they only ordered one size.

"But I like the number 15, so I'll take the bigger shirt for the number."

It is a very different home Stevens has come back to, compared to the one he left in 2013.

The former Otago Boys' High School pupil had been impressed by the set-up at Southern.

He felt it was one of the most professional clubs he had played for.

The training was good, the interaction with the coaches was good and he felt everything was done "properly".

That is a good endorsement from someone who has played for the Wellington Phoenix and All Whites, as well as putting in a stint in Sweden.

He felt the opportunities on and off the field had increased dramatically for players in the south since he left.

That included things such as helping find work - which for Stevens involved coaching for Football South.

Getting experience in the club had been key too.

"Back in the day, if you were down here you didn't learn the football way as such.

"I had to go away to learn how to play football.

"I had the ability and things and I was lucky to do that because I trained really hard.

"But I never learnt how to play football until I left the city."

He said that was different now.

The club's Irish players had been key in that, all bringing plenty of experience.

His return may just be for one season.

Stevens wants to have another go at playing in Europe.

After a tough time in his last stint, he is now rejuvenated.

His partner is from Sweden, so that will likely act as a starting point.

"I do want to play professionally again.

"It's really hard because you get so many setbacks and think I don't want to do it any more - just get a job and start just playing where you know you're going to be playing and stand out.

"But I'm definitely going to do it again.

"It gives you that drive again once you start playing OK and the team's playing good around you."

Before then he hoped to help Southern into the national football premiership's top four.

He felt the side was capable of beating Canterbury, which lost to Eastern Suburbs 1-0 last week.

Kickoff is at 2pm.