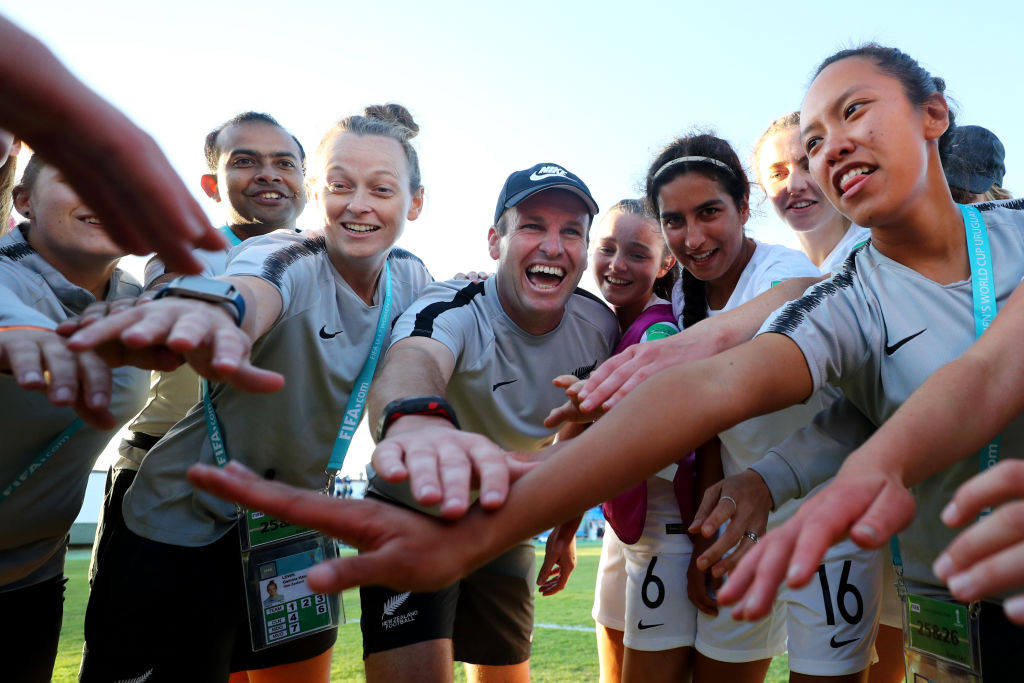 Coach Leon Birnie celebrates with the team after their win over Japan. Photo: Getty
The New Zealand U-17 women's team has shocked the footballing world by defeating Japan on penalties to make the World Cup semi-finals.

For the first time New Zealand have made the final four of a FIFA event.

Having earlier become the first team from New Zealand to make the quarter-finals of a World Cup and breaking several other records in the process, coach Leon Birnie and his charges were very much already in unchartered territory as they took to the field at the Estadio Alberto Suppici in Uruguay this morning (NZT).

But they weren't in any mood to bring their history-making exploits to an end and instead continued the fairy-tale by holding highly-fancied Japan to a 1-1 draw and then finishing the job with a dramatic 4-3 win in the subsequent penalty shoot-out.

Goalkeeper and vice-captain Anna Leat was the heroine, pulling off a fine save in additional time to keep the scores level before also keeping out Japan's first spot kick. She then stepped up herself to rifle home the winning penalty and earn one of the most memorable results in New Zealand football history.

"What a performance - these girls have come over here and game after game just defied the odds," Birnie said.

"We'd never got out of the group before and we created history by doing that. Then today is a special occasion - no New Zealand team has ever reached a semi-final and now we've done it. I'm so proud of the girls and it was an amazing performance," he added.

"Credit to Japan, they're a quality side so we've done so well to go out and compete with them and then for that last 30 minutes just to stay in there. And that was just pure grit and determination that we didn't want to concede. Then to finish like that and actually get through was amazing."

New Zealand went into the match as underdogs against a Japan side with a proud record in this tournament and who were yet to be defeated on their march to the quarter-finals.

But the Kiwis appeared to surprise their opponents in the opening stages with the quality of their play as they began to build the foundations of what would become a major upset. Japan tried to control the ball and implement their usual possession-based style but were clearly unsettled by New Zealand's willingness to press forward as Birnie's side took the game to their accomplished rivals.

New Zealand enjoyed a particularly strong spell of pressure after around 10 minutes, captain Aneka Mittendorff launching a string of trademark long throws into the box before Kelli Brown found the goalkeeper with a long-range shot from a tricky angle.

Japan did well to ride out that period but found themselves behind soon after as New Zealand's hard work on the training ground paid off in stunning style. In a well-worked routine they had clearly spent hours perfecting, captain Aneka Mittendorff stepped over a low corner from Macey Fraser, allowing Amelia Abott to smash home a perfectly-struck shot from the edge of the area on 17 minutes.

With the prospect of an unprecedented semi-final berth now on the cards, New Zealand were in dreamland and it nearly got even better in the 25th minute, Maggie Jenkins pouncing on a loose ball in the Japan box and firing off a shot that agonisingly clipped the top of the crossbar.

But they were brought back down to earth in unfortunate fashion just past the half-hour mark, Leat making a great save before Hannah Mackay-Wright did well to block the follow up but then stumbled and inadvertently forced the ball into her own net.

Japan enjoyed most of the ball in the second half but both sides found clear-cut opportunities hard to come by, only Macey Fraser, Gabi Rennie and Kelli Brown having any sight of goal with half chances for New Zealand.

They were forced to defend for most of the latter stages as Japan desperately searched for a winner but, with the majority of the starting line-up having been rested for their final group game, New Zealand's legs were fairly fresh and they dug deep to take the game to penalties.

Leat gave New Zealand the advantage with an outstanding save low to her right before Maya Hahn, Grace Wisnewski and Brown were all successful with their spot kicks. Japan had scuffed another of their attempts wide so Jayda Stewart had the chance to win it for New Zealand but skied her effort over the bar.

It wasn't to prove costly though as Leat took responsibility for the final penalty and showed composure well beyond her tender years to convert it with ease and create history for her country.

New Zealand will now take on Spain in the semi-finals of the FIFA U-17 Women's World Cup on Thursday morning from 8am.