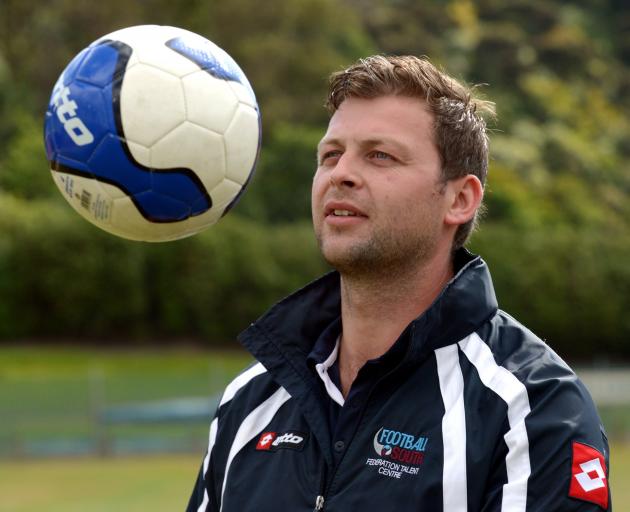 Football South chief executive Chris Wright. Photo: Gerard O'Brien.
Two key cogs in Southern United are moving on as clouds hover over whether the side will make an appearance in the national league.

Skipper Connor O’Keefe and striker Garbhan Coughlan are both quitting their roles at Football South and leaving Dunedin.

O’Keefe (26) was one of five Irish players who moved to New Zealand in 2016 to join h Football South and Southern United. He has been the skipper of Southern United for the majority of his period in Dunedin and is rock solid at the back.

Football South chief executive Chris Wright said O’Keefe’s departure would be a big blow but was completely understandable. With the uncertainty about the future of the national league, missing family and wanting to develop his coaching career, he had made the decision to move back to Ireland.

Coughlan, who is also Irish, and is the competitions manager at Football South, has a long-term partner in Christchurch and has been splitting his time between the Garden City and Dunedin. He was going to leave in March but has stayed on and will remain in his role until the end of the community football season.

Coughlan (27) was one of the best strikers in the national league and, in the 2018-19 season, scored 13 goals in 18 games. He became a marked man but still scored his share of goals last season.

A crafty player with a good first touch, he will be sought after by many clubs, should be want to play in the league this coming season.

Also moving on is Southern United assistant coach Stevie Lawless, who is heading back to Europe while media officer Holly Percival has returned to the United Kingdom.

Paul O’Reilly, the Southern United head coach and also the Football South football development manager before returning to Ireland in February, has not been replaced.

Wright said it had been tough losing four talented people in a short time and Football South staff had made some real sacrifices over the past four months. He said staff were now back to full hours and were looking forward to the rest of the season.

New Zealand Football received $900,000 from the government assistance package announced this week to fund national leagues and is looking to confirm the structure of the national summer leagues in the next couple of weeks. It is aiming to continue with a men’s, women’s and futsal leagues.

Wright said the structure and timing of the league would be revealed but most important to Football South was the cost.

He said Football South wanted to be involved but the competitions had to be financially sustainable for it. NZFl had recognised not all federations would be able to commit to the league because of cost.

Wright said Southern United had made real progress in all leagues over the past three or four years and wanted to continue but cost had to be taken into account.

Of the five Irish players who came out to join Southern United in 2016, Stephen Last and Danny Ledwith remain.