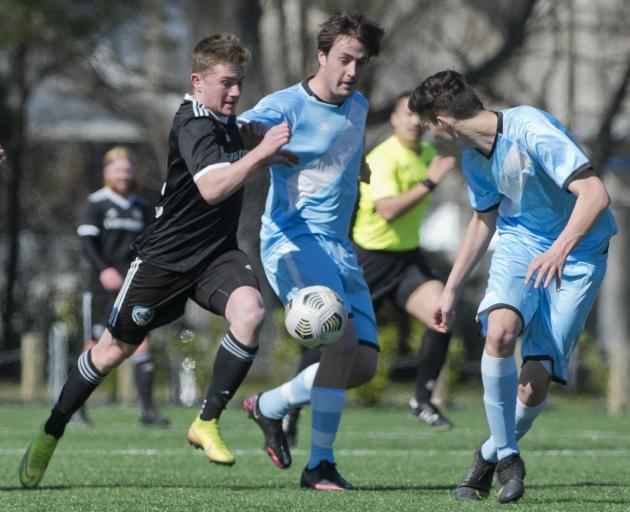 The South City Royals have formed a new link with the Wellington Phoenix. PHOTO: GERARD O'BRIEN
Dunedin's newest club has signalled its ambitions by forging a link with New Zealand’s only professional team.

The South City Royals, formed this year from a merger of the Dunedin Technical and Caversham clubs, are in the early stages of a working relationship with the Wellington Phoenix.

It will start in earnest on January 24-25 when Phoenix academy coaching staff will come to Dunedin for an "experience camp", one of three to be held in the South Island, that will give footballers born between 2008 and 2012 an opportunity to shine.

"It’s very much in its infancy," Murray said yesterday.

"We’ve had a couple of chats to Paul. They’re interested in a partnership, so we’ve been exploring some avenues.

"It’s just a bit of exposure and opportunity for our young players. For us, as a club, we’ve talked about creating pathways. The Phoenix are the only professional club in New Zealand for men and women now, so it could be a great opportunity."

Murray said it was possible a pre-academy could be established for skilled youngsters wanting a serious pathway in the sport.

He is adamant the southern region produces its share of talented footballers — they just need more opportunities.

"We’ve had players go to college in America, men and women, but that outlet has sort of closed up a bit with Covid.

"We do have players who are good enough to kick on to the top level, so we need to provide a pathway for them."

The Royals won the southern premiership in their debut year before a meritorious third in the Southern League, missing out on a place in the new-look National League by a point.

Murray is hopeful next season, the first full year under the new structure, will also be successful.

"We’re not losing many players at all, so we’ve got a core to build on, and we know we’re not too far away."

It all starts on March 26, when the Royals will have Southern League, premiership, Fletcher Cup and women’s teams starting on the same day.

The Royals will again have Green Island for company in the South Island-wide league, but Mosgiel has taken University’s place after the latter club could not fulfil its licensing requirements.

"It’s disappointing for the players, because there’s a lot of talent there, and they’ve been together for a few years," Murray said.

"But the clubs down here have known for a wee while this was going to happen, and we’ve been preparing for it.

"Unfortunately, University got caught a little bit. I know they’ve done a bit of work in the past three or four months to get up to scratch, but it’s a big ask. We spent a long, long time trying to get everything in order for our licence application."

Naturally, there will be some expectation the leading University players will be knocking on other doors as they seek to be in a team playing at the top level.

"I think they’re a pretty tight group, and it’s probably still a bit raw for them," Murray said.

"In the end, players will do what is best for themselves, and no doubt you will see a bit of movement before the season starts."