Golf: Putting woes for Woods on day one 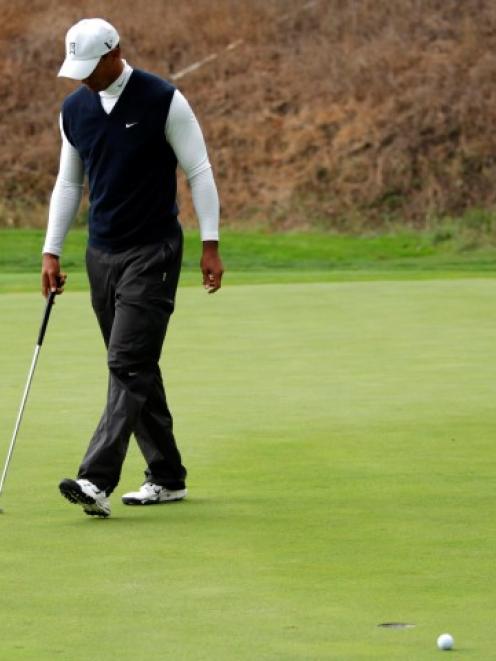 Tiger Woods reacts after missing a birdie putt at the 18th hole during the first round of the Frys.com Open in San Martin, California. Photo: REUTERS/Robert Galbraith
Tiger Woods came into this week's Frys.com Open with lofty hopes after finally regaining full fitness but the former world No 1 was betrayed by woeful putting in Thursday's opening round.

Making his first PGA Tour appearance in almost two months in a Fall Series event which generally attracts journeymen players and wide-eyed rookies, Woods struggled on the greens on the way to a two-over-par 73.

The 14-times major winner missed two short birdie putts, one from six feet and the other from just four, before ending a difficult day of scoring at a wet, ultra-long CordeValle Golf Club six strokes off the lead.

"That's probably one of the worst putting rounds I've ever had," a frustrated Woods told reporters after recording two bogeys, two birdies and a double-bogey at the par-five 12th.

"I just had a hard time hitting my (putting) stroke, and then I started altering it. I started losing confidence in it because I wasn't hitting my line, so it was just a downward spiral.

"I think I'm going to go put some lead tape on it (the putter) and see if maybe I can get a little bit more mass. It's always worked in the past."

Woods, who has not competed since he missed the cut at the PGA Championship in August, totalled 27 putts after hitting just nine greens in regulation and made only one in excess of six feet, a 12-footer to save par at the 10th.

Adding insult to injury, he was outscored by his playing partners as 2010 British Open champion Louis Oosthuizen carded a 71 and Patrick Cantlay, the world's top amateur, a 69.

"I'm just playing to get competitive and win a golf tournament," said Woods, who has not triumphed anywhere since the 2009 Australian Masters.

"It's about going out there and playing, and right now I'm six (shots) back. I need to put together a good round tomorrow and gradually piece my way back into the tournament."

Woods made an encouraging start under overcast skies, finding the fairway off the tee at the par-four first and hitting a superb approach to three feet, prompting cries of "Nice shot Tiger" from the gallery crammed around the green.

He coolly knocked in the birdie putt to get into welcome red (sub-par) numbers.

However, Woods bogeyed the par-four second after finding a fairway bunker off the tee and then taking two shots to escape the front right greenside bunker.

Worse was to follow at the par-three third where he missed the green long, chipped back to three feet and horseshoed out with his par putt after hitting the right edge of the cup.

With huge galleries watching his every move, Woods failed to build any momentum and he missed a six-foot birdie putt at the par-five ninth to reach the turn in one-over 36 -- five strokes off the pace.

Though he sank a clutch par putt from 12 feet at the 10th to remain at one over, he squandered a golden birdie chance at the par-three 11th where his four-footer slid past the right edge.

As the rain began to intensify, Woods made a complete mess of the par-five 12th, double-bogeying the hole after driving into the left rough and pulling his second shot into a hazard before taking a penalty drop.

He birdied the par-five 15th after ending up just short of the green in two shots but failed to make up any further ground over the closing stretch in late afternoon sunshine.

"I hit some bad shots, yes, but also I hit some really good ones," said Woods, whose world ranking has slipped to 51st following his struggle for form and fitness over the last two years.

"I was very pleased at the shots I was hitting most of the day, but I got nothing out of the round on the greens. Whatever momentum I could have gotten by hitting good shots, I just missed putts."

A US quartet of Brendan Steele, Briny Baird, Garrett Willis and Matt Bettencourt shared the early honours, all finishing the first round on four-under 67.