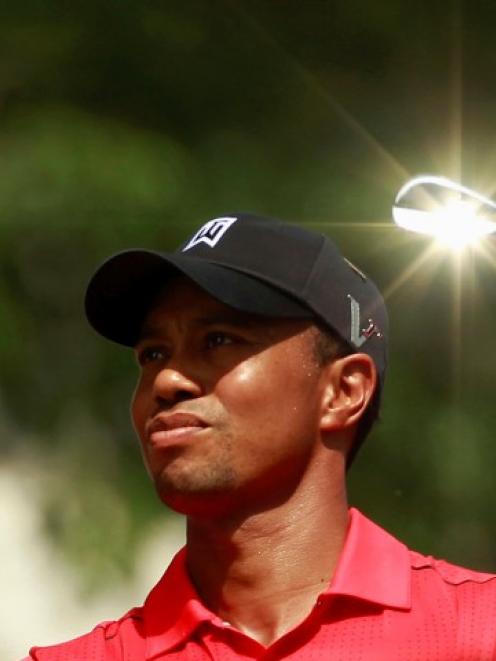 The sun reflects off the club as Tiger Woods hits off on the seventh tee during the final round of the AT&T National golf tournament at Congressional Country Club in Bethesda, Maryland. REUTERS/Kevin Lamarque
Tiger Woods has overtaken Jack Nicklaus in second place on the all-time PGA Tour winners list by winning the AT&T National tournament at the Congressional Country Club.

The former world number one claimed the 74th PGA Tour event of his career when he shot a final round of two-under-par 69 to finish at eight-under 276, two strokes clear of the field.

"It feels fantastic. It feels great to get to 74 wins and obviously pass Jack," Woods told reporters after overcoming an overnight one-shot deficit to win.

Woods has won three of his last seven starts, having claimed the Arnold Palmer Invitational and Memorial Tournament earlier this season, and while it has been four years since his last major victory, the world number four believes the next one will come soon.

"I remember there was a time when people were saying I could never win again. That was, I think, what, four months ago and here we are," he said.

"It was just a matter of time. I could see the pieces coming together.

"(Coach) Sean (Foley) and I were working, and we see what's coming, and we can see the consistency, and it's just a matter of time."

Fellow American and playing partner Bo Van Pelt closed with a 71 to finish alone in second, one shot ahead of Australian Adam Scott, who charged up the leaderboard with a final round 67.

The overnight leader, Zimbabwe's Brendan de Jonge, fell out of contention when he finished with a 77.

As the other challengers faded, only Van Pelt was able to stay in touch with Woods but as the pressure mounted down the stretch, bogeys on the closing three holes brought his challenge to a screeching halt.

A 10-foot birdie putt on the fifth gave Woods his first outright lead of the tournament but Van Pelt countered with a birdie on the sixth to draw level.

Woods once again gained the ascendancy with birdie on the ninth but Van Pelt refused to wilt in the extreme heat, joining the leader once more when he picked up a shot on the 11th.

Both men traded birdies on the 15th and bogeys on 16 to keep them locked together on eight-under par but Van Pelt's drive on the penultimate hole sailed left and trouble ensued.

His approach shot caught a flyer and sailed well over the green, and despite an impressive flop shot, he was unable to find the putting surface in three shots and walked off with another bogey.

His final chance was to hole out from the fringe on 18 to force a playoff but his effort rolled past the pin and he missed the par putt to leave Woods celebrating a two-shot margin of victory.

The only player with more career titles than Woods is Sam Snead, who won 82 times.