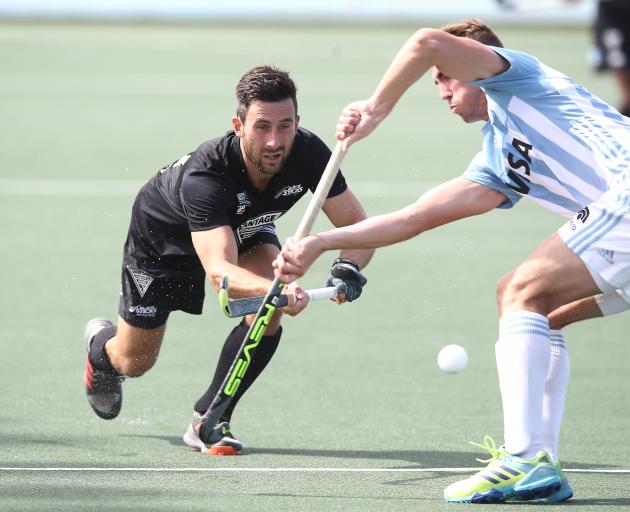 Google heartbreak and Black Sticks and you will get an immediate sense of what Kane Russell feels every time a similar story pops up on his social network news feeds.

The Black Sticks appeared destined to reach the semifinals of the Rio Olympics. And who knows, maybe even the gold medal match awaited.

They led a powerful German side 2-0 with about five minutes remaining in the quarterfinal clash.

Russell had been part of a staunch defensive effort. But Germany pegged one back and then scored twice in the final minute to seal a stunning comeback win dubbed one of the greatest of all time.

"I was on the field for probably all of that and I still think about it," Russell lamented.

"It would be really nice to get back there and get some redemption because the last five minutes I spent on the pitch at the Olympics still gives me nightmares.

"We were just playing so well. To be up 2-0 against Germany with only five or six minutes to go — and we just beat Belgium, who were probably the best team in the world. You die wondering what could have happened."

Russell will have to wait another year for a shot at that redemption he desires so much.

Covid-19 interrupted plans to stage the Olympics this year and it also interrupted Russell’s season in Europe.

When it became apparent how bad the pandemic was, he left his Dutch club and flew home to New Zealand. He waited out lockdown in Karitane with his family and enjoyed the break.

The 28-year-old did not enjoy the uncertainty though, and said it was a relief when the decision was made to postpone the Games.

"I’m not going to lie — it was pretty hard to stay motivated, especially not knowing if the Olympics, well, if they were going to happen.

"But when they made the call it was a relief — just one more year, we can do this."

In the meantime, Auckland club Howick has a pretty decent premier side this season. Russell has linked up with veteran Black Sticks defender and captain Blair Tarrant at the club.

Fellow southerner Malachi Buschl also plays for the side, while star Black Sticks striker Hugo Inglis is also on the books but is recovering from back surgery.

"Basically, all the Southern [Southern Men’s team] boys have ended up at Howick. We are like the Howick Doggies, you could say.

The Doggies is the nickname for the now defunct Southern Men’s team, which competed in the National Hockey League.

Russell, Tarrant and Inglis have teamed up a lot over the years. They honed their skills at Otago Boys’ High School before going on to represent the region and their country.

Russell and Tarrant will team up again at German club Hamburger Polo in the next four or five weeks.

The pair have signed a two-year deal but whether they can take up the first year of their contract is in the hands of the pandemic sweeping the planet.

"We’ll have to see how things play out. But if we are confident we can get there safely then it is all go."

The Blacks Sticks have nothing on the international calendar for the remainder of the year, so the trip to Germany would allow the experienced pair to play some top-level hockey.

But next year the Black Sticks hope to play the away games of the FIH Pro League. They also have the Oceania Cup with Australia in Auckland in February and there is talk of a "heat camp somewhere to try and get used to the heat over there in Japan".

"But there is a lot of planning to go into this because everything had to be rejuggled and I guess we are still working that out.".

Tuataras too tough for Albany