The first ground has been broken for the new turf at the school this week. The $2 million project is funded by Otago Hockey Association, Dunedin City Council and King’s High School.

All up, 1600cu m of soil will be removed from the site and recycled. Once all the ground work has been done the water-based turf will be laid after Christmas, and if all goes to plan it is hoped the turf will be all set to go just after school goes back in February.

A large trench has been dug to lay pipes to get the water into the turf.

Otago Hockey Association general manager Andy McLean said it was great to get the turf construction under way. It would be a great asset for the city.

Three turfs in Dunedin would be a real bonus when the city is looking to host national tournaments and eliminate the need for games to be played late at night.

The turf was situated on King’s High School land and rector Nick McIvor said the school’s gymnasium was set to be modernised next year. The gym is right beside where the new turf sits.

New indoor cricket nets were built at the school a couple of years ago.

The gymnasium building would be moved into the future with more facilities for high performance sport, including offices and a function room.

The gym would still be the same size, but it would have a second storey added which would include a viewing deck for people to watch games on the field below.

A function centre would also be built in the second storey which could host teams playing at the school.

McIvor said the gymnasium would be more of a sporting complex which would also involve a weights room and be a base for high performance sport.

The gymnasium would still be big enough for indoor sports such as basketball.

The cost, which was still being finalised, was at a ballpark figure of about $1 million, and would be funded by money from the Ministry of Education, the school and other funders. 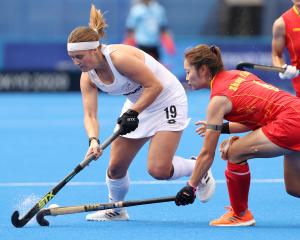