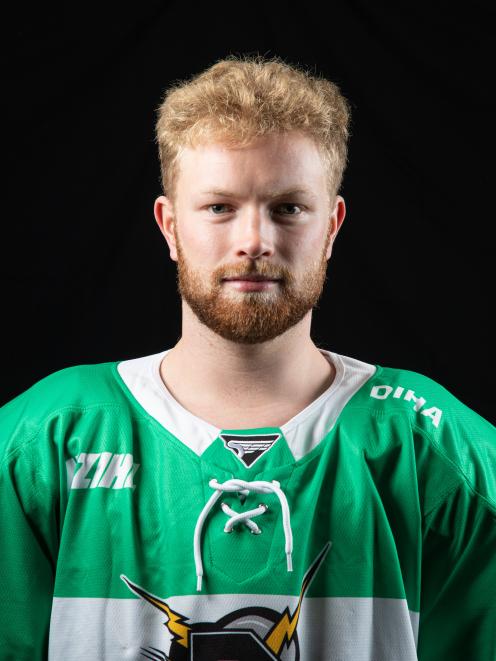 Ben Harford
Balancing a degree in medicine with national league sport would seem no easy task.

It is one Ben Harford is managing surprisingly well, though.

The 22-year-old has been one of the early season standouts for the Dunedin Thunder.

A fifth-year medical student, Harford has three goals and five assists to rank fifth in the national ice hockey league in points after four games.

He is no newcomer to this level, although it is certainly career-best form he takes into tonight’s match against the Canterbury Red Devils at the Dunedin Ice Stadium.

Originally from Queenstown, Harford is in his third year with the Thunder, having previously played four years for the Stampede.

The Thunder had a younger squad and that created differences between the two teams, which also helped provide more opportunity for Harford.

"Coming from the Stampede where they’ve obviously got a great team . . . they’re just so good they didn’t really need me.

"Coming here to Dunedin it’s a lot more responsibility and I feel like I’ve been able to take that role and step into.

"It’s made me a better hockey player."

Fitting that around one of the University of Otago’s busiest and most difficult degrees makes it even more impressive.

But it is not something that phases Harford — it was just a case of managing his time well.

"I’ve just been going to both and it’s worked out and I’ve somehow got to where I am.

"But I think we’ll be getting a bit busier towards the end of this year, so we’ll see how well that balancing act continues.

"I think I should have time for both.

"Medicine’s not really any more than a nine to five if you’re productive.

"There’s never really that much time I have to take off to make hockey.

"It’s just organising my studies around it to make sure when I do have time off I can go to hockey."

The Thunder split two fiesty encounters with the Red Devils in Christchurch three weeks ago.

Harford was expecting more of the same from the Canterbury side.

However, he said being back at home and on a bigger rink would enable the Thunder to spread out and use its speed more.

Meanwhile, the Stampede hosts the West Auckland Admirals in Queenstown tonight and tomorrow, both matches beginning at 6.45pm.