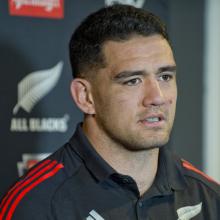 Codie Taylor
Many sports teams over the years have gone all-in on the promotion of younger players.

The reasoning is sound. You are often better to roll the dice on a 22-year-old player, knowing he/she might turn out to be a superstar and form part of the core of your team for a decade, than hold on to veterans until they are past their use-by date.

Older players — just like us older people — can depreciate in value (I know that sounds harsh but you get the drift) extremely quickly, especially in contact sports.

That is why it has been mildly interesting, if not surprising, to see the All Blacks giving long-term contracts to (relative) old salts in recent weeks.

And, in one move that I thought might have generated more reaction, captain Sam Cane — at 29, and with a fair old injury history now — was able to sign a new contract for four more years.

I’m not lurching to a position of ‘‘why is New Zealand Rugby throwing so much money at old buggers’’, let that be clear.

These are classy rugby players, core men in an All Black team that might have wobbled recently but has had a generally outstanding run in recent years, and there is clearly huge value in retaining experience and institutional knowledge.

It’s just ... interesting. They all have some miles on the clock, and you just have to hope they are investments that pay off.

This is still a development I find really weird.

While Kiwis have spent months trapped overseas because of our broken (starting to be repaired) MIQ system, a powerhouse rugby team can somehow whistle in a foreigner to play sport.

We are loaded with talented rugby players in this country. The Crusaders should know — they hoover up as many as they can possibly find. Was there really a compelling case to allow the Pumas captain to play here?

It also jars, for me, with New Zealand Rugby’s insistence on only picking All Blacks from players based in this country. Matera is taking a prospective All Black’s place.

It is exciting enough that the New Zealand Open will go ahead in Arrowtown in late March-early April, given the immense difficulty in holding major sports events in this country right now.

But the fact the top three finishers will qualify for the British Open? Magnificent. What a carrot for those golfers.

Reuters reports an American ice hockey team — at a tier below the NHL — apologised this week for ‘‘an in-game promotion that saw local teachers crawl on the ice to collect dollar bills to help pay for classroom supplies’’.

Yep. The Sioux Falls Stampede was understandably slammed for running a ‘‘Dash for Cash’’ promotion, dropping $5000 in bills on to the ice before 10 local teachers scooped up cash on their hands and knees in front of a cheering crowd.

‘‘Although our intent was to provide a positive and fun experience for teachers, we can see how it appears to be degrading and insulting towards the participating teachers and the teaching profession as a whole,’’ the team said in a written statement.

‘‘We deeply regret and apologise to all teachers for any embarrassment this may have caused.’’

The Guardian reports a Winter Olympics curling qualifying tournament — featuring two Kiwis — in the Netherlands had to remove some adverts from the ice as they led to the Americans knocking a live-stream on the head.

The World Curling Federation later announced it had cut a deal with adult website EasyToys to resume live-streaming with the ads replaced by the statement ‘‘#equalityforall’’.

Correct, you could not make that up.

Good to see plenty of talented sportspeople, including Otago athletes, recognised in the longlist for the Halberg Awards.

Sad, though, to still see no room for an Otago Daily Times representative on the judging panel.

Stuff and NZME are represented. Loads of television personalities. Various athletes. But not us.

So don’t blame me when me when the Black Caps are overlooked for team of the year and that award goes to a rowing pair.

What a strange year. Covid, obviously. But your man started 2021 as the assistant editor of this great paper, and ends it back at his old desk. Didn’t see that coming.

Have a happy and safe holiday period.

So when the Highlanders repeatedly sign up Japanese players, that's ok. But when the Crusaders do the same with an Argentinian, it's not?