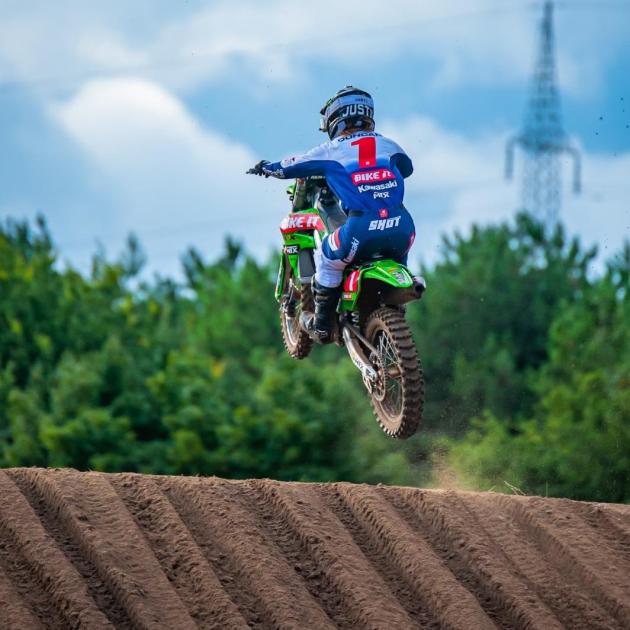 An exacting weekend on the sandy Lommel track at the Belgium round of the WMX led to the two-time defending champion missing out on a round podium.

At least, bolstered by her two wins in the opening round, she is nicely placed in the championship on 85 points, just two behind Dutchwoman Shana Van Der Vlist.

Riding for the England-based Bike It MTX Kawasaki team, Duncan did not start the round promisingly.

As the gate dropped for the first WMX race, she came out further down the order in eighth place.

Duncan then got caught up in the first lot of race drama, when she was looking to dive down the inside of Denmark’s Sara Andersen. The pair touched, and both crashed as a result.

Keen to salvage some points, Duncan slogged her way through the heavy sand to finish sixth, Lynn Valk emerging the winner in front of her home crowd.

Determined to make amends in the second race, Duncan got off to a good start, leading a trio of her title rivals: Larissa Papenmeier (Germany), Nancy Van De Ven(Netherlands) and Amandine Verstappen (Belgium).

Italian Kiara Fontanesi then stormed through the field, making several attempts to pass Duncan for the lead and eventually succeeding by lap four.

Riding her Kawasaki KX250 hard, Duncan cemented herself into third after a fierce battle with Van De Ven that went on for several laps.

In the end, it was Van Der Vlist who enjoyed her first WMX race victory as Fontanesi and Duncan finished second and third respectively.

Duncan said the Belgian sand tracks were not replicated anywhere else in the world and certainly not in New Zealand, where she spent the summer training.

“It was a tough day in Belgium’s sand but we knew it would be tough," she said.

"The local and European girls live here, or can train here, and it’s always going to be hard to compete with that.

“It’s hard to accept though, especially after coming off double wins. However, I’m not going to beat myself up about it. I put my best effort into the two races, fought all the way to the chequered flag and banked important points.

“I have to remind myself that championships are won on your bad days. I’m going to keep my chin up and keep working hard."

The WMX now heads to Turkey for a special double-header on September 4 and 5, followed by midweek racing on September 7 and 8.