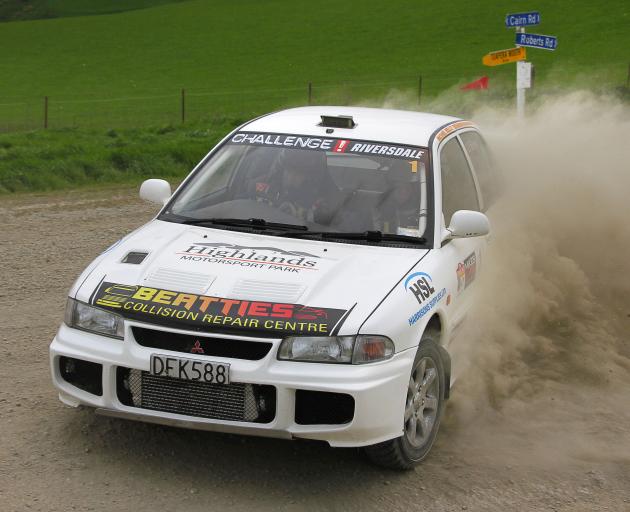 While his son Hayden Graves (16) calls the pace notes, Andrew Graves powers through a corner on the 15km long special stage four on Roberts Rd, to maintain his slender lead and win the Lawrence Rally for the fifth time. PHOTO: JOHN COSGROVE
After a near-faultless drive, Gore driver Andrew Graves picked up his fifth Lawrence Rally win on Saturday.

Driving on the rally he considers the best run club event he has ever competed in, Graves held off a strong late charge by second placegetter Carter Strang, from Wallacetown, to win the event by 13.1sec.

Graves' controlled driving of his Mitsubishi EVO 3 won him the first four of the five stages of the rally. Strang clawed back six seconds and pipped him on the final Breakneck Rd special stage into Lawrence.

Graves said that despite the heat, high winds and the dust they had no problems with the car.

"It ran faultlessly on the day. We had a fantastic battle with Carter all day, he really kept us honest with his stage times which were often only a second or two behind us, then he pulled out all the stops and beat us on the final stage," Graves said.

On the first special stage through Corkscrew Rd, Graves and Strang were separated by only four one hundredths of second. Strang said his Mitsubishi EVO 6 developed a slight engine misfire on high boost and this forced him to run on low boost mode for the middle stages which impacted on his stage times, then he made the decision to switch back to high.

"Low boost helped with the misfire, but we were slower, so on the last stage we made the call and switched to high boost to go faster, despite the misfire," Strang said.

Graves said the high winds around the province on Saturday really didn't affect the drivers competing on this high speed rally.

"The Lawrence Rally is a very fast rally. There are lots of times when you are in fourth and fifth gear for quite a while, as the roads are nice and wide.

"The wind worked well at keeping the dust from hanging around [and] we never really felt it out there but the smooth roads caught us out on one corner when we suddenly slipped sideways and brushed up against the bushes but apart from that, it was a great rally," Graves said.

Reading the pace notes for Graves throughout the rally was his son Hayden (16) who was competing in his first Lawrence Rally.

"It was a great day. I am learning new skills every time dad and I go out and he is really helping me with my driving skills," he said.

Hayden is an up and coming production saloon speedway driver and like his father alternates between the left and right seats.

He said he has enjoyed calling the pace notes for his dad this year and would like one day to switch seats.

Clerk of the course Mike Hosken said the 12th annual event, run by the Otago Sports Car Club in conjunction with the Lawrence community, attracted a capacity field of 53, including drivers from as far afield as the Philippines, Australia, and several North Island contenders.

"The Lawrence Rally is a great event. We try provide a rally that helps those just starting in the sport and as well as giving the more experienced drivers a good rally to compete in."

He said a few drivers were using the Lawrence Rally to get used to the fast open roads as they prepare for next year's Otago Rally, which will use many of the same roads.

The first two-wheel-drive car home was the Ford Escort of Robert McCallum and Peter Kennard, from Christchurch, finishing in a time of 46min 18.5sec.

There were 12 retirements from the rally, mostly due to mechanical or electrical problems including top-seeded Dunedin driver John Spencer whose Mitsubishi EVO 3 had mechanical problems touring to special stage two.